Things move along quite a bit this week in Galilei Donna, and I’m liking where it’s going so far. Even if this episode felt like a typical sequence of events out of a mecha anime, I’m still down with it. Don’t hate me, but giant robots have never really appealed that much to me. Though if it’s an awesome goldship mecha, then I’m on board (figuratively anyway).

I kind of feel bad for saying that Kazuki was too ordinary in the first episode impression because that actually becomes a point of contention this episode. Anna keeps mentioning that they are clearly the descendants of Galileo, but she’s mostly talking about Hozuki and her inventions. Unlike her sisters, Kazuki just wants to continue living her life as a normal girl. Once again, I feel like I’ve seen similar things in Western movies, where the middle sibling is often the angstiest. 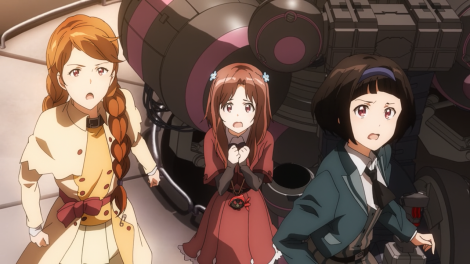 So while Sylvia isn’t dead, she’s been inflicted with a nasty case of amnesia and she’s still in the hands of the bad guys. I can only imagine how they’ll take advantage of this stroke of memory loss, but I can tell that it will be incredibly important in episodes to come. Speaking of the bad guys, we finally get insight into who they are. The men are from a company known as Adnimoon that’s using the secret organization Messier to steal the world’s methane hydrate supply. They’re also blaming all of these attacks on the sky pirates, which explains why Cicinho wants a piece of the action.

The enemy of my enemy is now my enemy so that my enemy can’t get to them philosophy is something that I quite enjoy. The sky pirates don’t really care about anything, as long as they aren’t getting blamed for stuff they didn’t do. They just want the Galilei Tesoro just so Messier can’t have it. As if this series wasn’t like a video game already, it’s revealed that the secret to locating the rest of Galileo’s documents lies in mysterious melodies. That excites me, and I can’t wait to see how music will tie everything together.

“Everything stinks of oil…I can smell Hozuki everywhere!” ~ Kazuki Ferrari