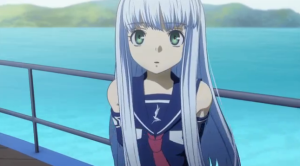 I hope that you weren’t expecting to see Gunzou and company because that is not what the episode is about. Were you expecting more Takao? So was I, but we only get to see her for like twenty seconds. I think that every episode needs more Takao. The writers decided to give us more of Haruna’s unfortunate situation. That isn’t particularly bad, but it was definitely unexpected.

Gunzou and company are not looking very good right now. They are operating at a very low capacity and they are out of special Fog torpedoes. They do not have access to the nanomachines that would allow Iona to repair herself and they need to take the experimental weapon to the United States. The vibration warhead is supposed to be more powerful than the erosion torpedoes, but that is theoretical at this point. Japan only had the resources to develop one and the means we are operating with a lack of testing. They are going to have to go to Iwoto. Takao is already there waiting for them, but she is under attack. It doesn’t look serious in all honesty. Here is the actual focus of the episode. Haruna wakes up in a little girl’s room. The rich girl rescued her and has started to play with Haruna like she is some kind of doll. They are playing dress up and whatnot which has made Kirishima laugh quite a bit. The little girl is very lonely as her parents are out of the picture, but she is very special. It turns out that the girl is an artificially made human. She was developed in order to surpass human limitations in an attempt to defeat the Fog. Her creator is almost dead and he wants the two mental models to be her friends. That would be fun and all if the government wasn’t about to kill everyone.

I like the series, but this episode wasn’t really doing it for me. I understand why they decided to do it. I think that they are attempting to either make more members of the Fog switch sides or at least show an evolution in them that will lead to the mental models becoming more human. It is a very overdone concept, but it is something that is almost standard procedure in science fiction. Making the little girl an experiment was interesting. If humans really couldn’t develop the necessary weapons to fight in the war, then I could see experiments like that going down. Do I think that they would be effective? No, but that is why I am not living in a world of science fiction. I am concerned that we may be spending too much time on this. I can imagine a good portion of next week’s episode being dedicated to the military encounter and I think that it could derail us from the actual story quite a bit. I am either saying this because I need more fights or because I want to see Takao’s reunion with Gunzou. Either way, I think that there are more important things going on right now.

If you couldn’t already tell that this is basically a date.

There is something interesting going on. Kirishima used nanomachines to take over that stuffed animal. Honestly, that made me think of something fairly crazy. Did the Fog use nanomachines to take over the bodies of various women in order to gain human understanding of tactics? I am not sure if the series will go that far, but it is stuck in my mind right now. I guess the only other thing to talk about is Takao. She was attacked by an island full of cannons that she claims was not using human tactics. Takao also seemed familiar with this, but I am guessing that this will not pose too much trouble. The encounter seemed more comical than anything else if you ask me. I am anxiously awaiting this reunion. I think that Takao is probably the best thing to happen to the series and I need to see more from her because of it. The romantic comedy stuff is sure to raise my interest in this series and not just because I am a fan of romantic comedies. I just think that Takao being in love with Gunzou is too hilarious. I expect great things from their next encounter and I hope that I am not setting myself up for disappointment,

Kirishima looks a bit different in this episode.