After the glory that was the idol sidequest from last week’s episode, it’s almost a shame that we’re going back to actual plot. I know, heaven forbid we get actual story development. This episode is more or less a direct continuation of episode 5, after Mirai defeats the Hollow Shadow. Though, there is a small humorous reference to the last episode with Hiroomi submitting an application to HND48 for Mitsuki. While I have no qualms with that decision, Mitsuki apparently does and decides to replace all of Hiroomi’s Jpop with yaoi CDs. Classic.

The meat of the episode deals with the struggle between Mirai and Sakura, the little sister of Yui. Sakura uses one of the most awesome weapons I’ve seen in my day, which is a cross between a polearm, gun, and flamethrower. The only downside is that because she isn’t a Spirit Warrior, she has to continually supply it with youmu souls for power. Though, as we see in the confrontation with Mirai, when the weapon runs out of power it’ll try to devour its user. Thankfully with Mirai’s badassery, Sakura is saved from an untimely and flashy doom.

But was Sakura fighting out of revenge or jealousy? In the beginning, we’re led to believe that she simply wants to kill Mirai because she killed her sister. But looking back at their past, it turns out that Sakura has always felt alone and in the shadows because both Yui and Mirai were Spirit Warriors, while she could only cook. This also explains why she’s able to criticize Akihito’s omelet. Mirai reveals to Sakura that she and Yui were also jealous of her. Probably not for her cooking prowess but more likely because Sakura doesn’t have to deal with all of the Spirit World mess. 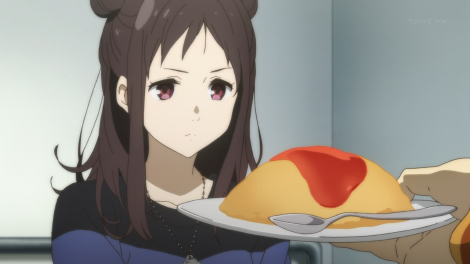 At the end of the episode, we get a nice little plot twist. That guy we’ve been seeing around Mitsuki and Hiroomi’s sister? Yeah, he gave Sakura that devil weapon, for reasons we don’t yet know. All we do know is that something known as the Calm is approaching, bringing with it the titular kyoukai (境界) or Boundary.

“Like the memories in the bell, I was lost…” ~ Sakura Inami