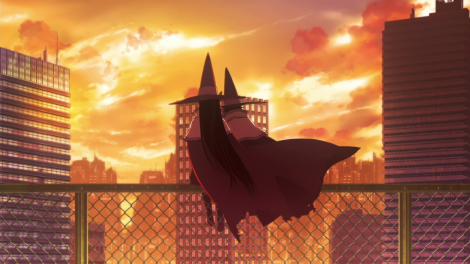 I wonder if I should just make a list of all of the things that I love about this series. I suppose Ayaka would be far on the top of the list, but there’s more to the series than just her. For instance, Honoka acts as the perfect foil to her character. He’s average but even after beginning his magic training this episode, he doesn’t really show any particular sign of having some innate talent. If it were any other series, he’d bust out mad skills out of nowhere because he’s “the chosen one” or something. Here, it’s just as advertised: Honoka is incredibly ordinary and I love it.

That’s not to say he might not become badass as the series progresses, but at least this way it’ll be more interesting. Both he and Ayaka have pretty ingrained personalities so far, but slowly we’re seeing some development. In this episode, we experience a more fierce and emotional Ayaka from what we’ve seen previously. I mean, she’s always been kind of fierce. How else do you describe someone who resorts to fire torture to protect her princess?

However, this episode we get to see more facial expressions from her. The first time this happens is surprisingly during a normal tennis match during P.E. Though, I guess if Ayaka is involved it’s no longer really normal. I love the little fist bump she gives Honoka before the game, too. These little things, like donning glasses to tutor Honoka and snapping pictures of Honoka in his robe, seem so out of character for her, but they add to why I think she’s such a great character. The way she keeps a straight face while doing all of this is too cool.

Even when protecting Honoka from their biggest threat yet, Chronoire, Ayaka manages to keep cool (as much as a fire witch can anyway). Despite getting stabbed by Chronoire, Ayaka is still able to pull out the big guns which in this means summoning and partially taking on the form of a big green fire dragon. Similar to her fight with Tanpopo and her rabbit legion, Ayaka tells Honoka to close his eyes so I’m assuming both techniques used are pretty similar. Later, we actually see Ayaka have a change of expression, and hear her raise her voice, when she instructs Honoka on how to fly. From what I could tell, it also looked like she was preparing to take Honoka’s injuries if he failed to fly, which is pretty amazing of her.

Sorry that this impression turned out to be me talking about how much I love Ayaka, and I hope that trend doesn’t continue into the future (it probably will). In terms of the story, things are building up. We learn that Chronoire wishes to manipulate Honoka into swallowing a magic ball which will supposedly release Ayaka from impending danger. Of course, it must be some trick to get Honoka to do something in favor of the Tower Witches. Whether he actually does it remains to be seen…

“That broom is your loyal servant! Give it your command!” ~ Ayaka Kagari