Episode 07 – “Takamiya-kun and the Noblesse Oblige”

I’m honestly not too sure what is happening in this series, plot-wise anymore. I know I said last time that the spontaneity and “just go with it” attitude was a great strength, but I still feel like there should be some stronger flow with the story. Or maybe I should just accept that Medusa, Chronoire, Ayaka, and Kazane will all just be ambiguously “good” and “bad.” Unless they somehow explain all of this by the end of the anime, that may be the best course of action to take. This all being said, none of this stops Witch Craft Works from being the newest series of my top favorites list. 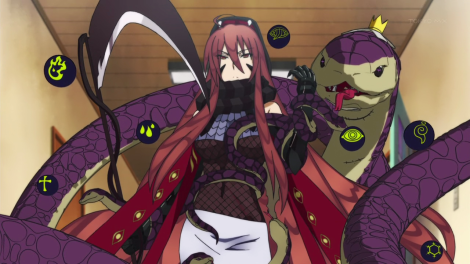 I’ve watched the episode a couple times now, so I’m going to try to make sense of things. Ayaka’s main goal at this point is to ensure a safe world for Honoka to live in, one without seals or having to worry about witches coming after him. To this end, she wishes to defeat her own mother in order to get her on her side. Since she beat Medusa, she works out an alliance between themselves so that Kazane doesn’t get ahold of her or the Ivory Quintet. So at this point, it looks like Ayaka is working with the bad guys, even allowing them to live in Honoka’s house (without him knowing too). Well, I guess when you put everything out in words, it’s not as confusing. But how Chronoire and Kazane got so chummy, I don’t know. Especially considering that Kazane brutally tortured her. 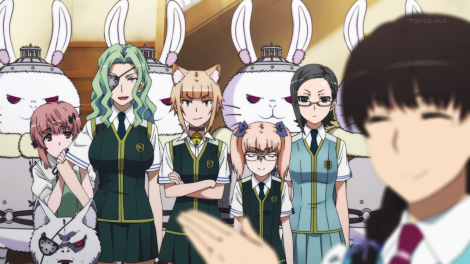 As random as it is (which is kind of saying something for this show), it was really funny to see the Ivory Quintet move into and essentially take over Honoka’s house. Despite Ayaka allowing them to stay, they still plan on backstabbing her when the chance arises which is a very Team Rocket thing to do. Of course, the chance never arises because Ayaka kind of doesn’t go to sleep but rather likes to watch Honoka sleep while doing a variety of late night activites. At this point, I wouldn’t be surprised if Chronoire moves into the Takamiya household.

“You would fall so far just to protect that boy?” ~ Medusa