Coming off of Winter 2014, which was filled with some very over the top anime series, we’re greeted with Spring 2014. Unfortunately, it seems that things have been pulled back a bit and a lot of these plots sound kind of the same. There are 3 series about magic/sci-fi academies, a handful of mech series, and an assortment of fantasy adventure tales. The good news, I guess, is that people who like these settings will have a great variety to choose from. However, people looking for something new and fresh may be out of luck. Who knows though? Nature always surprises in the most mysterious of ways.

Below, I have some quick first impressions of each series of interest (mostly just me failing at being funny or interesting) and their alleged air dates. For actual informative synopses, check out the link above.

Let’s kick this preview off with my most anticipated series of Spring 2014. A cast of badass females who are trained assassins? Yes, please. Some possible cute yuri romance? Yes, please. I’m already loving the blue-haired Azuma Tokaku. I’m praying for Akuma no Riddle to live up to the hype I’m putting on it, and it will be a preview of what Diomedea can do for this summer’s KanColle anime adaptation.

I fell in love with the artwork from the Atelier games from the first time I saw them, and I’m honestly really surprised that this is getting an anime. While video game adaptations will always be cursed, if you approach this as a stand alone series then I’m sure you’ll be met with a fantastical series with great art direction and setting.

A parasitic virus outbreak and secret government-issued missions actually sound pretty interesting. The problem with a lot of action series is that it’s always the same old song and dance. Of course, the true test is how the series handles what it has laid out. At least I can say the animation in Black Bullet looks fairly nice.

I’m not one to totally knock a series from my first impressions, but I can’t really see this as just busty ladies with guns. While I’m also not wholly against any of this, I can say Blade & Soul is not very high on my to-watch list.

It’s nice to see Brains Base back on track making some really good series. Sure, the otome game adaptations were good for a niche audience, but I personally prefer some nice school comedy. Although just by looking at it, you wouldn’t really know it’s Brains Base because it has some of the most unique animation in a series that I’ve seen in my day. Definitely looking forward to this one.

*insert Captain Planet reference* This new series has mechs and is by Bones. Basically if you liked Eureka 7, then I expect Captain Earth will be right up your alley.

I’m honestly surprised by how many historical anime series that get made. I’m guessing that means that they’re really popular, but I still can’t get myself into them. I’ll give them a chance one day, but today’s not that day. Also, let it be known that the tagline of the series is: “I can be the greatest man in the world, because I am a virgin!”

Contrary to popular belief, I don’t watch everything that has cute girls doing cute things. But after watching the trailer and seeing the mad coffee-serving skills, I’ve decided to give this one a shot. This is definitely one of those where I’ll know after the first episode whether I’ll like it or not (I’m sure the same applies to many of you too!). 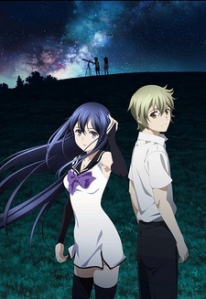 One of many action series featuring high school students this season. This one has a mouthful of a name, has hints of human experimentation, and magic. I’ve become wary of serious anime series with so many elements because it’s easy for the story to run amok and not make much sense. The art style reminds me of Strike the Blood, so there’s that too.

If there’s anything I’ve learned from watching Kuroko no Basuke, it’s that Production I.G. knows how to produce sports anime series. In Haikyuu!!, there are a lot of guys and lots of balls. Watch if you like. 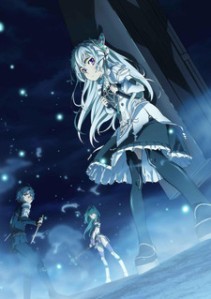 Those eyebrows. From the creator of Outbreak Company, we have a new adventure series and I think I can over look the strong eyebrow game for the awesome coffin and rifle. Bones has been good to me with Zetsuen no Tempest and Noragami, but it’s still going to be hard to choose which action series I want to stick with this season.

ef – A Tale of Memories anyone? MyAnimeList has the comedy tag on this series, but I can’t really see how that could really be the case. Another school anime from Brains Base this season, and this one feels a bit more on the sentimental side. Excited to see where this one goes (and whether it really is a comedy or not).

Brains Base with the triple play this season. This one is another otome game adaptation, so you either like it or you don’t. 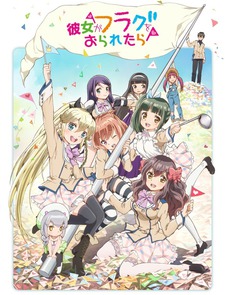 If you liked NouCome from last year, this twist on the romcom harem should be up your alley. Instead of being plagued by god-awful choices, the main character here can literally see flags above people’s heads that indicate events in the future. I can see this one being a riot and a half.

Not really too sure what to make of this one. If you approach it as something serious, then it will probably be awful. However, if you think of it as a satire of mecha/ecchi series then your mileage might go a bit further. A bit. Ultimately depends on how much you enjoy watching robots with dick cannons.

Not enough mechs this season? Here, have some more! This is probably the darkest looking one of the bunch, and they make the distinction in the synopsis that there are 8 boys and girls. Such a clean number is a signal to me that some of them will probably die.

It airs in a week and I still can’t find a preview for this series. I feel like Gainax has fallen out of grace lately (especially in comparison to the might Studio Trigger), so it’ll be interesting what they can do with Mahou Shoujo Taisen.

Check out the trailer here! or not / Airs: April 8th

I get this weird Valvrave vibe and Mahou Sensou vibe from this series, whose title translates to “The Irregular at the Magic High School.” That’s not really a good thing either since opinions are generally not so great about those two series. The characters from Mahouka Koukou no Rettousei look great, but I can’t say the plot interests me greatly.

I was so excited for this…until I found out that it’s only a 13 minute series for whatever reason. Still, a comedy about a manga writer has a lot of potential in my opinion, and even the 3-minute Mangirl! short managed to bring on some laughs.

Guaranteed to take the internet by storm once it airs. Scratch that, because it already has with all of the hype I’ve seen around this series. I’ve read through the manga, and I’m impressed by what I’ve seen so far. A great cast of characters with complicated pasts and special abilities, surrounding an intriguing plot centered in modern Tokyo. Grab your favorite hoodie, cause it’s gonna be a good ride.

On the other side of the hikikomori lifestyle, we have No Game, No Life. Looking at the plot synopsis, none of it makes any particular sense and that’s probably why I’ll watch it. They main characters get summoned into a world where everything is decided by games, which is ironic because they claim that reality is just a “crappy game.” Sound familiar? 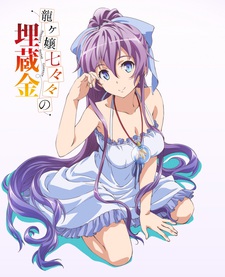 The main character is the ghost of a cute NEET girl who’s looking for her lost treasure that’s said to possess mysterious powers. I don’t know about you, but there’s nothing about that sentence that doesn’t sound hilarious to me. Definitely on my watch list.

Would you like some magical academy with your mech series this spring? Well, we have plenty to choose from, and this one is more fantasy than sci-fi. Beware of tentacle attacks and Saber lookalikes.

Here’s something that I didn’t expect from J.C. Staff, a dark survival game type anime series that is probably along the same vein as Day Break Illusion. It could be interesting and has the potential to be the most intense series this season. Also, that is one ugly-looking mofo in the trailer.

Ah, a tale of castles, princes, princesses, and most importantly, of love. While I hesitate to use such a gender-normative genre descriptor, this is more or less a shoujo series and that should be pretty indicative of what you can expect from Soredemo Sekai wa Utsukushii. Because after all, even still the world is beautiful.

Sequels and Reboots and Spin-offs of Interest: