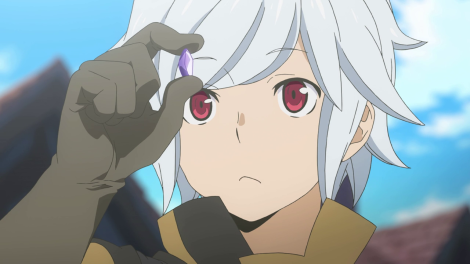 I don’t think I can say it enough, but I love fantasy settings and it’s a shame that most fantasy anime end up being generic, mediocre, or simply plain uninteresting. So far, Dungeon ni Deai wo Motomeru no wa Machigatteiru Darou ka? (which I will mercifully shorten to DanMachi) is neither of these things. The first thing I noticed while watching is that the main protagonist is voiced by Yoshitsugu Matsuoka, who I’ve grown to strongly dislike over the past two years because he’s flooded the medium with his voice. He’s largely typecasted to the same archetype of character, thanks to his success as Sword Art Online‘s Kirito.

Thankfully, his role as our hero Bell Cranel seems to be a departure from the latent badass trope his characters always seem to have. Bell is an incredibly weak adventurer who explores dungeons in hopes of saving a beautiful girl and falling in love. In an incredibly ironic twist of fate, a strong female knight comes to his rescue and he is the one who falls for the girl. Bell even goes as far as to redouble his efforts to try to impress this mysterious beauty. I’m a big fan of this dynamic, which I got to see a lot of in Witch Craft Works, and I hope that this reverse relationship continues in future episodes. 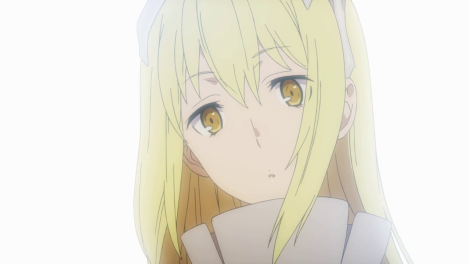 DanMachi‘s setting feels like a video game without being overt like Sword Art Online or Log Horizon, taking place in a world where people can make a living by creating guilds and going on expeditions in dungeons. Monsters turn into crystals which can be redeemed for gold in towns, reminiscent of the system used in the Trails in the Sky games. Perhaps it’s because I’ve been hooked on dungeon crawling games like One-Way Heroics and Sorcery Saga lately, but DanMachi‘s JRPG vibe is right in my wheelhouse.

In typical shounen style, Bell has the unrealized ability of being an exceptionally quick learner, but I like how this trope is implemented in DanMachi. Here, it’s an ability that’s concealed to him by his Goddess companion Hestia when she prints out his stats receipt and is the result of his desire to impress his knight in shining armor, the Sword Princess Ais Wallenstein. While I think DanMachi had a particularly strong first episode, the scene in the bar with Bete’s drunken tirade felt a little forced, purposefully trying to get a reaction out of Bell to progress the story. 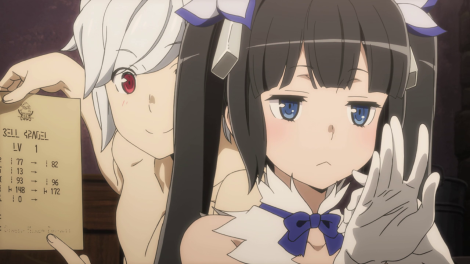 Outside of this one little gripe, I’m impressed with DanMachi and am excited to see what new scenarios and characters lie ahead. Will we see more of Ais? I hope so. Will Bell become OP enough to sweep her off her feet? I hope not because that would just be so blasé.

This series is highly recommended for anyone who wants a comedic fantasy show with surprisingly well-animated action sequences.

“The children in the lower world change so easily. We gods, on the other hand, are unchanging.” ~ Hestia