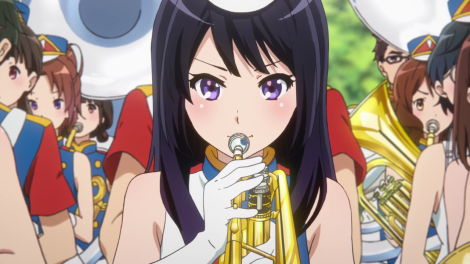 The long awaited Sunrise Festival is upon us. How do our intrepid musicians fare in their first public performance? Pretty good, actually, making up for the decided lack of results we’ve been seeing for the past few episodes. As Kumiko observes, there has been a change in attitude since their first attempt at the “Marine’s Hymn” in front of Taki-sensei, and it’s not like a globally drastic change either. There are still students who don’t agree with Taki-sensei and students who don’t particularly like him, but I think at the whole club, at this point, agrees that it’s no fun being no good.

Seeing as how SunFes is a marching event, here’s where all of those laps around the school’s campus pay off. Watching Hazuki and the other beginners learn how to march brought me back not only to my first time marching in high school, but also my first time learning my college’s special style of marching. These are precious memories that I know many other musicians out there share as well, and Hibike! Euphonium does a powerful job of capturing those feelings in this episode. I also love how it seems like every school has a different for the crossing sideways step. At my high school, we called it karaoke step, in college it was grapevine, and in Hibike! Euphonium it’s mystery step.

In addition to the learning portion, there’s also the unimaginable nerves you get before a performance, especially the first one and especially when you’re with other bands that you’re sure are better. Honestly, as corny as it sounds, all you can do at that point is do your best, maybe even better than your best, and hope that everything works out all right. Thankfully, Kitauji’s first performance goes off without a hitch.

I talk a lot about the idea of progression in DanMachi, and I personally think the progression in Hibike! Euphonium isn’t quite as smooth. The band is almost too good too fast, but I suppose there’s a reasonable explanation for this. It’s not that the band lacked talent before, they simply lacked a way to channel that talent to get the results. Taki-sensei, like any good teacher, found a way to guide them while they did the rest. The question now is, what next? Certainly, they won’t be happy with just doing alright at SunFes. The road to Nationals is a long one, after all. Plus, we still need to see Hazuki actually play tuba! 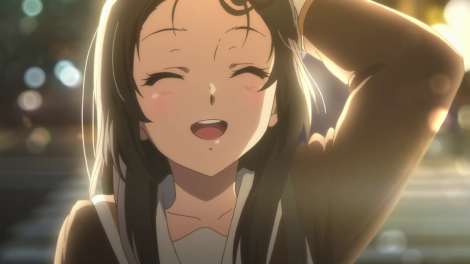 And what of the relationship between Kumiko and Reina? This episode saw spectacular progression on that front, and I couldn’t be happier. What really makes the dynamic work is Kumiko’s character and the superb voicework by her seiyuu, Tomoyo Kurosawa, making for a believably humorous and awkward personality, where every non-negative reaction she can get out of Reina is a personal victory. Also, how beautiful was the animation this week? Plenty of shows look worse with each week, due to poor planning, but Hibike! Euphonium manages to look better and better with each episode.

Instead of a wind band piece this week, here’s a recording of “Rydeen” by Yellow Magic Orchestra, the piece that Kitauji plays for SunFes.

“Her smile was even more mysterious than the mystery steps.” ~ Kumiko Oumae