CAUTION: There are spoilers!

I played Shovel Knight for the first time this past week when it was released for Sony platforms, and what else can I say but better late than never? Before, I didn’t really understand why so many held it such high acclaim, but now I can easily see how it became such a huge hit. Other than simply being an excellent NES inspired action-platformer with incredible level designs and music, there are a bunch of little things that I want to point out that made me fall in love with the game.

After all, sometimes it’s the little things that can make a game special. 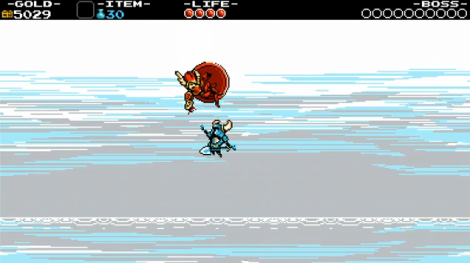 You don’t have to catch Shield Knight.

In the various dream sequences that happen in between sections of the game, Shovel Knight has to fight off hoards of enemies in an attempt to save the falling Shield Knight and is a brilliant metaphor for the guilt he harbors. The beauty of this is that you actually don’t have to catch her at all. The game doesn’t punish you for letting her fall, and yet more than anything else in the game, I did my damnedest to catch her every single time.

It’s an excellent example of how Shovel Knight gets the player engaged with very little exposition. All the prologue tells us is that Shovel Knight wants to overcome his cowardice and save Shield Knight, and that’s really all that we need to know. We don’t catch Shield Knight for a reward; we catch her because it’s the right thing to do.

To say that this game’s soundtrack is amazing is a gross understatement, and the moment that really solidified the soundtrack’s greatness in my mind is the opening moments of Propeller Knight’s stage. Shovel Knight makes his way up onto Propeller Knight’s flying airship, stomping jellyfish and climbing ladders along the way, with the rhythmic spinning of propeller rotors embedded into to the stage’s theme.

What really puts the soundtrack over the top for me is how each boss has his own special battle theme, using motifs taken from his particular stage theme. To me, this shows how much thought and care went into designing every aspect of Shovel Knight. Like the game itself, the music not only pays homage to its NES era inspirations but it fluidly captures the spirit of those games while still being wildly imaginative. 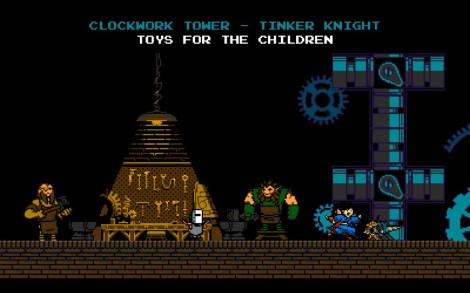 The end of Shovel Knight gives us a bit of epilogue for each of the Order of No Quarter knights, in which we learn that the diminutive Tinker Knight now devotes his time and talent to making rad Gundam-like toys for children. This is more than just a funny wink of the eye thrown in at the end for laughs, showing that all of these characters have qualities and characteristics that extend beyond simply being interesting boss battles.

Even their brief dialogue interludes with Shovel Knight before their respective battles add so much depth of character. From these few sentences, we ascertain that Polar Knight and Shovel Knight could have been former partners and that King Knight is a big weirdo who likes shiny things. I even appreciate how Treasure Knight calls out Shovel Knight for being a plunderer of treasure himself. You fall in love with these charming characters, and when they’re hanging off the edge at the end of the game, you don’t even have to think twice about saving them.

One worry I had going into Shovel Knight was how much it was going to rely on the save the princess video game trope, a device that was rampant back in the games it draws inspiration from. That worry was dissolved during the final battle, where Shovel Knight and Shield Knight fight side by side as equals. The prologue teases the fact that the two were a legendary duo, and I love that we get to see that dynamic play out in the game’s final moments.

Really, Shield Knight’s shield is the key to the battle, acting as a boost for Shovel Knight, blocking the Enchantress’s otherwise unavoidable (save for the broken Phase Locket) bullet hell attack, and ultimately saving the lives of Shovel Knight, Black Knight, and thankfully Shield Knight as well. Honestly, you don’t need hours of character development to make me emotional. Just show me Shovel Knight and Shield Knight next to each other, sleeping on a log.