You know what, I start too many of these things with “We finally get to see [blank] this week,” so let’s just cut the foreplay and jump right into the goodies. Tubas are known for incredibly boring parts, and tuba players will be the first to admit that, too. And yet, there’s a certain appeal to the instrument – one that certainly drew me to learn how to play it for fun in high school. What started out as me messing around with my friends in the bass section eventually led me to playing sousaphone at several big events in college, including halftime shows and a parade through San Francisco.

Maybe it’s the size of the instrument or its important role in musical harmony, but there’s just something about the big brass instrument that makes it cool in my eyes. According to Gotou, the tuba’s charm point is that it has nothing. It’s an instrument that’s unremarkable without others to support. It’s like trying to solo battles with a mage or a healer; it just won’t work. But in the context of a full ensemble, the tuba adds depth of sound and harmonic significance. That’s why most musicians will say that the tuba is the most important instrument in any group. 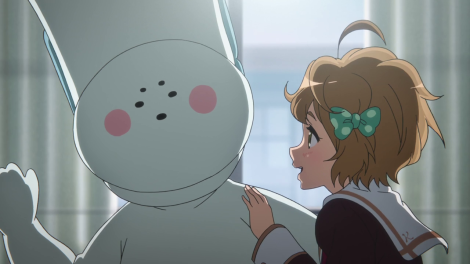 But how do you teach that to a poor high school beginner who didn’t intend on learning tuba in the first place? It’s definitely discouraging when all you have to play are long tones and quarter notes because to the untrained ear, it doesn’t give much indication of ever improving unlike playing cool solos where you can easily tell you’re getting better. After a failed attempt with Kumiko’s rousing performance as Tuba-kun, the girls simply sit down an play a trio of “Twinkle, Twinkle, Little Star” together. That may have been the first time Hazuki hears herself with other players because we never see her playing during rehearsals. As someone who likes playing and singing bass parts, I can tell you that it’s a magical moment when you can hear the different parts meld and kept together by the bass. 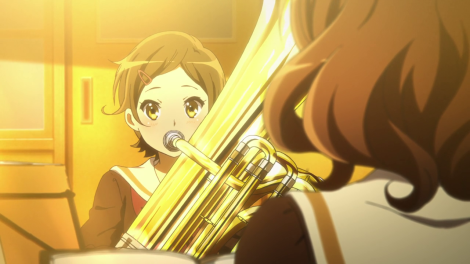 “The nice thing about tuba is that it doesn’t have anything.” ~ Takuya Gotou