When consuming any sort of media, whether its anime, video games, or movies, there are three incredibly important things that affect my enjoyment. For the sake of alliteration, I’m calling them the 3 Axioms of Appreciating Anime, comprised of: atmosphere, aesthetic, and attitude. Each axiom is related to the other in some way, but each is unique in how it shapes the tone of an anime series. Through these 3 axioms, I can usually tell whether I’ll like a series within the first episode, simply because these are things that, unlike story content or character development, are always present at both the surface and core levels.

If this sounds like a bunch of mumbo-jumbo, then it’s because you’re probably correct in making that judgment, as an anime’s quality can’t properly be quantified with just these three different metrics. Past these axioms, elements such as the aforementioned story and characters are needed to flesh out and bring a series to life. Otherwise, a good anime will never reach the heights of a great anime. 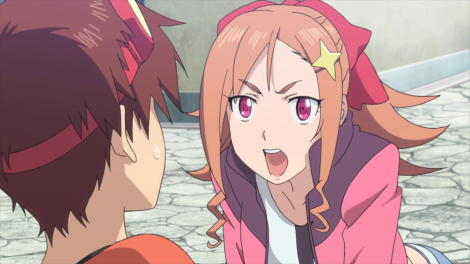 During the first five minutes of Comet Lucifer, I was struck by vibes of Tengen Toppa Guren Lagann, Eureka Seven, and Fractale, sharing aspects from each axiom. The atmosphere of exploring caverns for unknown goodies is immediately evocative of the first episode of TTGL, where we see Simon digging through the earth with a similar, insatiable curiosity. Of course, we have the protagonist of Comet Lucifer, Sougo, skating around the beautiful city, with a carefree attitude reminiscent of Renton’s passion for hoverboarding in Eureka Seven. Finally, the bright, pastel aesthetic with its fantasy, sci-fi setting reminded me of the lesser known series called Fractale.

While all of these elements strike pretty high interest on my axiom metric, I’m reminded that I never finished TTGL or Eureka Seven. I was also not very impressed by the story in Fractale, either. So while I make a big deal over how much I care about the atmosphere, attitude, and aesthetic of an anime, there needs to be something to hook me into the world, whether its the plot, the characters, or whatever. So far, Comet Lucifer has thrown a lot of interesting prospects at me, nothing as quite stuck to me yet. It’s still very early though, and my 3 Axioms tell me to continue the adventure through the world of Gift.

“When tears drowned its torrent of rage, the first bird cried in sorrow.”