At last, we’re finally entering the main overarching narrative, and it feels like a natural transition from the various mysteries we’ve already experienced. In a world where the majority of anime series suffer from varying degrees of pacing issues, the progression in Sakurako-san doesn’t feel too slow nor too fast in regards to moving into the veritable main course of the series.

I can imagine that some viewers wish the series spent less time on the side mysteries and focused more on the core mystery, but I think the series has moved along at a near perfect pace. In addition to the small hints that are consistently dropped in different episodes, each mystery opens a window into the minds of both Shoutarou and Sakurako-san, and through these seemingly isolated events, we get a sense of how both protagonists operate. The earlier subplots similarly provide valuable context for characters that return throughout the series, like Yuriko and Isozaki-sensei. 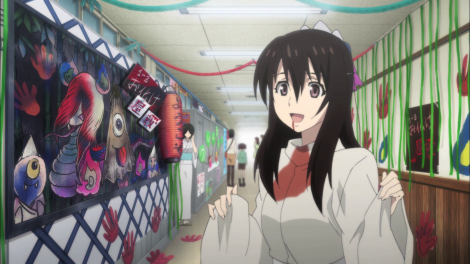 Because we’ve seen six episodes of Sakurako-san calmly examining and analyzing the remnants of the once living, we understand why Shoutarou chastises her for being insenstive, and for those same reasons, we are surprised when Sakurako-san becomes defensive about the cat. I am certain that these feelings towards her old cat, Ulna, are connected in some way with the death of her brother, Soutarou. It’s not clear to me exactly how, and I love the draw of this particular mystery that has been swirling around and tugging us along since the very first episode.

And let’s not forget Sakurako-san’s comatose uncle who has been in her house this whole time. How exactly do all of these moving parts fit together, and how do these pieces connect with the events from the past? And just how many more mysteries has Sakurako-san been keeping up her sleeve?

“‘As I stand in remembrance of youth disemboweled, the autumn wind blows’.”