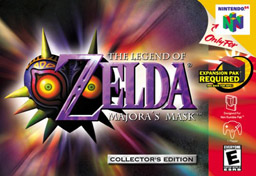 Originally posted on 12/21/2012. Bringing this back to celebrate the announcement of Majora’s Mask 3DS!

After the wake of the Mayan Calendar’s end, what better game to talk about than the pioneer of the doomsday counter? Often overshadowed but never forgotten, The Legend of Zelda: Majora’s Mask has created a name for itself as one of the most unique and dark entries in the immensely popular Zelda franchise. Released in 2000, on the coattails – and ultimately in the shadow- of the widely successful Ocarina of Time, Majora’s Mask had some incredibly large shoes to fill. But instead of simply expanding on the path that Ocarina of Time trailblazed, Majora’s Mask threw a complete curve ball at Zelda fans. This lasting impact may be the reason why the game continues to garner attention from the fanbase. In the GameFAQs “Game of the Decade” poll back in 2010, Majora’s Mask came out on top, beating out the likes of Super Smash Bros. Brawl, Grand Theft Auto 4, and Bioshock. While hardcore fans of the series may have been taken aback by the unorthodox nature of the game (as was the case with Zelda II: The Adventure of Link), it is unarguable that Majora’s Mask created an experience that was quite unlike any other game fans had ever seen before.

Yes I have, creepy mask salesman.

The game is a direct sequel from Ocarina of Time, and begins with Link’s search for his “precious friend,” Navi, along with his run-in with the Majora’s Mask-sporting Skull Kid. After being transformed into a lowly Deku Scrub and getting his horse stolen, Link is grudgingly paired up with the rude fairy, Tatl. The two inevitably find themselves in Clock Town and spend a grueling three days searching for a way to return Link back to his human form. They then discover a shocking revelation: the Skull Kid is summoning the Moon to crash into the world. Though our hero Link attempts to put a stop to the Skull Kid’s plans, he is ultimately unsuccessful and is forced to play the “Song of Time” in order to reset himself back to three days in the past. The clock’s countdown begins anew, leaving it up to Link, and the player, to explore the land of Termina in search of a way to prevent the world’s imminent demise.

Retains the game controls that Ocarina of Time nearly perfected.

The game plays exactly like it does in Ocarina of Time, if not better. Requiring the use of an Expansion Pak, Majora’s Mask is graphically superior to the prequel and has a much smoother frame rate. While the world is, by unit area, smaller than its predecessor’s, Termina has a level of depth that Hyrule lacks. Due to the nature of the game, Majora’s Mask encourages you (if not downright forces you) to become familiar with the ins and outs of every corner of the map. This goes for each geographic location as well as the residents’ daily routines. With each passing day, paths open and close, as townsfolk live out their lives in different spots in a dynamic and time-sensitive manner.

Something that Majora’s Mask does incredibly well is develop stories and personalities for each of the NPC’s. In a lot of ways, this game becomes a big mystery that Link must solve. Encountering the townsfolk in various locations over the course of each three day cycle provides further insight into their lives and the struggles that they face. With each meeting, you’ll learn a little more about that person and how he or she is interconnected with some other facet of the life of someone else. By figuring out how and why things went the way they did, Link is able to travel back in time with the power to right these wrongs.

Throughout the progression of time, Link watches how the various townspeople handle the situation of the impending apocalypse. Some citizens will react with manic aberration, while some will confront the end with steadfast optimism. Surprisingly, these scenarios can get rather emotional (the Anju/Kafei sidequest and Romani/Cremia at the ranch, in particular), adding an additional sense of urgency for Link and the player. The Anju/Kafei and Romani/Cremia sidequests are particularly outstanding, but I would have to say that my favorite moment is the Postman’s resolve and adherence to his work ethic to the bitter end. 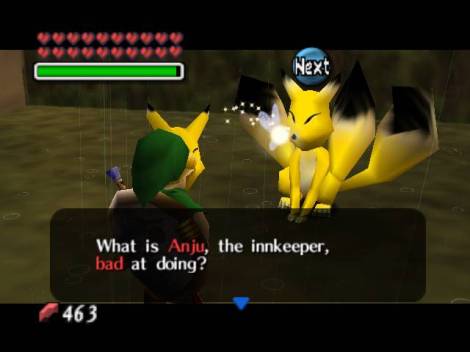 Many tasks can only be completed by really getting to know the townsfolk.

The score is phenomenal and quite underrated, including great tracks like the three Clock Town themes and the ocarina melodies. This game has two of my personal favorites, the “Song of Healing” and the “Oath to Order.” The first is essentially Saria’s Song put into reverse and into a minor key. It can be considered the most important tune in the game because it is used to “heal” the ailing hearts of the inhabitants in Termina. In doing so, Link is often rewarded with a mask that contains the sources of these troubled spirits and will grant him special abilities that range from infinite bomb explosions with the Bomb Mask to running with the Bunny Hood (from Smash Bros. fame).

In addition to these are the most interesting aspect of Majora’s Mask, which are the masks that allow Link to transform into his beast forms, the first of which being the aforementioned Deku Scrub, followed by the Goron and Zora forms. While Link may not be able to transform into an adult in this game, these three different metamorphoses more than make up for it. For the first time, you get the chance to experience life through the eyes of the various races that frequently populated the world of Zelda. Challenging the “Song of Healing” as the game’s most pivotal melody would be the “Oath to Order,” which is used to call the four Giants of Termina, in hopes of stopping the Moon. The melody is hauntingly beautiful, yet elegantly simple in that it only spells out a d-minor chord with a 5-3-1-3-5-1 progression. Koji Kondo is really a master at integrating depths of meaning into deceptively simple melodies because while the “Oath to Order” sounds somber, it gives off an overall impression of resolution and conviction, thematic elements that pervade the game.

“Whether a parting be forever or merely for a short time… that is up to you.”

Being so similar to Ocarina of Time, it will always find itself being compared to it, when in fact the two are very different games. The first offers a large-scale adventure that harkens back to the Zelda games of yore, while the latter provides a closer, more intimate take on a tried and true formula. It’s much more introspective than what is typically expected from the series, which has you saving the world because that’s what you’re told to do. Majora’s Mask creates a scenario in which you, the player, feel compelled to save the citizens of Termina because of the bonds developed throughout the course of the game. This aspect is where the game shines the brightest: by providing the motivation for the player to help Link bring about a morning worth waking up to.