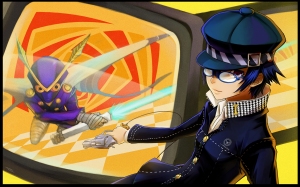 I can’t make a post about Bryan without including Naoto.

So anyone that loves anime should have friends that also love anime. The great thing about having such friends is that they will come across series that you may not have found on your own so they can recommend stuff to you. Of course, just being friends won’t make it so that your tastes are completely the same, but trying new things is also good. I have known Bryan for way too many years and he has told me to watch more series than I can count. So, in honor of his birthday, I will be ranking my favorite recommended series from Bryan. All of these are quality series, but because one of the most important things to consider when telling someone to watch a series is how much it would appeal to their taste, there will be some personal bias in this list.

Baccano! is a very unique series simply because it is based around gangsters in 1930’s Chicago. Lie to my face and tell me that isn’t on the list of things that would never become the topic of an anime. With its mystery, supernatural powers, and 1930’s gangsters, Baccano! sets itself apart from almost anything I have ever watched. The mix of elements that go into this story are kind of a mind fuck, but the execution is great and the plot is very captivating. If you are looking for a refreshing anime experience, then you need to watch this series.

Jinrui wa Suitai Shimashita found a way to make a colorful world filled with fairies pretty dark. Some of you may wonder why I have this so high, but watch this anime and tell me that it isn’t fantastic. The story takes place in a world where humanity is declining so the situations that our main character gets into are very interesting. The series may revolve heavily around a singular character, but Watashi may be one of my favorite characters of all time. If you can handle some oddly confusing story arcs, then you should try out this series.

Mawaru Penguindrum looks very innocent until you actually watch it. If you like supernatural penguins and stalkers, then I suggest you see a psychiatrist. Jokes aside, the struggle that our two main characters go through in order to save their sister’s life is a very interesting mix of mystery, comedy, and the supernatural that will confuse you until you are forced to enjoy it. Bryan may be mad at me because I put his favorite anime at number three, but this is my list so I can do what I want. If you want a very unique experience that keeps your mind active, then you should give this series a chance. 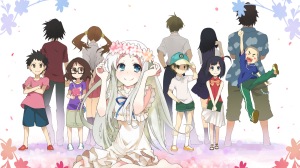 Ano Hana is a series that will let you find out whether or not you have a heart by administering a crying test. Honestly, I only cried about one tenth as much as I should have when I watched this series because two of my friends were watching it with me which did not allow for me to get as emotional as usual. The emotional journeys that the characters undertake in their attempt to revisit the past are way too impactful. The story is very dramatic and it dives into various coping methods that people use when dealing with great loss. If you don’t mind getting completely drawn into the lives of fictional characters, then you should get the tissues ready.

Steins;Gate is that series that almost got away from me. Not only is the description of the this series ridiculous, but the first half of the show makes for kind of a slow start. However, Bryan insisted that I watch Steins;Gate so I had to give it a chance. The very unique way in which time travel is used in this series is reason enough to watch it, but the story is what really defines this series. Okabe’s tireless quest to right what he has wronged in this world makes for a very riveting tale of science fiction. If you want to see time travel in a way that you never thought would be done, then get your Dr. Pepper ready. 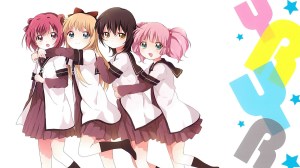 I don’t know why, but Bryan insists that I watch Yuru Yuri. I mean, I do enjoy comedy, but it is kind of suspicious how he won’t stop talking about this series. I will give it a chance, and it isn’t like I don’t hear good things about this series, but it just seems to stray away from the style of his usual recommendations. Oh well, it isn’t like I am already watching twenty series or anything like that.

There are still some series that I have yet to watch like Tokyo Magnitude 8.0 and Kannagi.

Bryan likes to make me watch some crazy stuff. I haven’t gotten to everything that he wants me to watch, but I have seen most of the series and these are my favorites. Two things you may have learned about Bryan from this list are that he likes serious anime and Brains Base quite a bit. I didn’t want to get too in-depth in my descriptions of these series because you can expect someone to review them in the future and you can find out more about these series when that time comes. Anyways, some of my favorite series have been presented to me through Bryan and I would like to thank him for that. Also, happy birthday dude.

I will just leave this here.