So this mouthful of a title translates to “My youth romantic comedy is wrong as I expected,” but is thankfully abbreviated to Oregairu. Based off a light novel series, the anime is dialogue-heavy, like almost ridiculously so. This can be off-putting for people who want more straight-forward comedy and don’t really feel like reading an entire book on screen. However, the ever-flowing dialogue leads to deeper characters and more interesting dynamics, I feel.

Our hero (maybe antihero?), Hachiman Hikigaya (CV: Takuya Eguchi, as in Kazuya from Gosick), has a very cynical view of the youth ideal, believing that it leads to the undoing of anyone who indulges in its vices. To correct this potentially dangerous nihilistic philosophy of his, his teacher sends him to spend time with an equally eccentric girl named Yukino Yukinoshita (CV: Saori Hayami, as in Tsuruko from Ano Hana). She’s the only member of the Public Service Club and has a similar view of youth as Hikigaya. She acknowledges her own beauty and how its led to more problems than helped her. She’s awfully blunt when speaking, and she might not even notice half the time. The two talk, and it’s revealed that Hikigaya’s problems stem from traumatic social experiences in middle school. It’s pretty obvious that the teacher had these two meet so that they could help each other out with their problems, before they both become too socially inept. 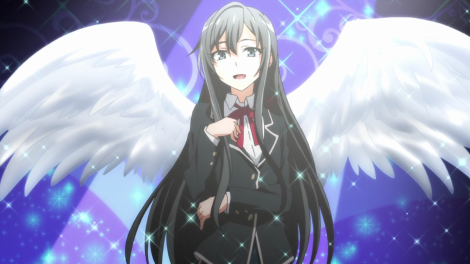 A third member eventually comes along in the form of the upbeat Yui Yuigahama (CV: Nao Touyama, as in Kanon from The World God Only Knows) who requests help from the Public Service Club. Also, see a pattern with the names so far? Anyway, Yui wants to make cookies for her friends, but doesn’t know how. Yukino refuses to make them for her (teach a man to fish, etc.), so she attempts to coach her to make her own. Unfortunately, Yui is kind of terrible in the kitchen. Hikigaya bakes his own batch, claiming that they’ll be the most delicious things ever, but they turn out just as crappy. Yui acknowledges that they suck, but says they’re okay because he made them just for her. Ah hah! It looks like Hikigaya has an idea of how to interact with people some times.

The animation leaves a bit to be desired, unfortunately. There are a lot of inconsistencies with the characters’ faces, but everything else, like the backgrounds, looks great. Brains Base has a history of inconsistent character animation that stems all the way back to Durarara!! and Baccano! (both of which I love, by the way). The OP and ED songs are amazing though, and the seiyuu act out their respective roles well. This is important for a series with as much talking as this one.

Oregairu takes the familiar setting of social misfits banding together and takes it to an extreme level. The emphasis on dialogue rather than actions creates a subtextual character development, as they interact each other and bounce ideas back and forth. If Bakemonogatari and Boku wa Tomodachi ga Sukunai had a child, I think it’d be Oregairu. Disappointing animation aside, the insightful dialogue and funny characters are enough to generate a large wave of interest within me. Interested to see what kind of scenarios arise between these aliens of society.