I’d like to rescind any previous statement I’ve said this anime season and make a correction: this series is now my favorite from this season, maybe even from this whole year so far. Everything, from the characters, the deep story, the music, and animation, is just great and puts it above everything else. Unfortunately for the clueless optimistic me from last week, it looks like MISAKA 9982 did not survive being crushed by a train, and her clone “sisters” are left to clean up the remains.

Even the original Misaka shows that she’s absolutely no match for Accelerator who possesses the ability to control any and all vectors. After taking college physics, I know that this means he can change the direction of any force or even electric fields. What a broken-ass ability. 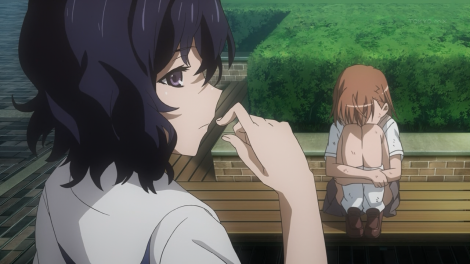 Surprisingly, a person appears during Misaka’s time of guilt and helplessness. That person happens to be the mysterious Shinobu Nunotaba (I find it hilarious how she occasionally spits out English phrases so nonchalantly). It turns out that despite her role in the Sisters Project, she actually opposes the use of the clones as Accelerator fodder. For this reason, she even spread the money cards in the alleys so that Accelerator couldn’t carry out the experiments in secret. Once again, we see how these random events throughout the series end up being important for the story.

Nunotaba developed the “Misaka Network,” which allows the clones to develop memories as data rather than actual chemical emotions. This way, knowledge can be passed on to future clones (presumably to aid them in combat), and they don’t have emotions that would otherwise hold them back from they’re experiments. However, the clones can express opinions and even enjoyment. Because of this, Nunotaba discovered the line between guinea pigs and sentient human life. 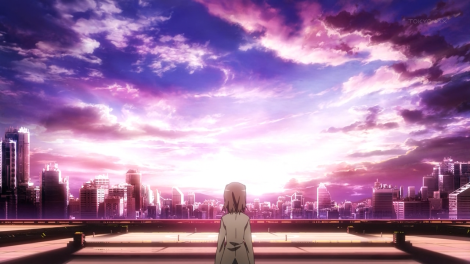 The entire flashback scene with her and one of the clones was incredibly well done. I hadn’t noticed the background music for this series before, but in the more emotional scenes, it really stands out. Nice emotive piano work along with heart-twinging strings helps to bring out the sentimentality of the scenes. I have a soft spot for inanimate objects and animals (though the clones aren’t really either of these), and I get emotional when they get hurt and they don’t/can’t even realize it. However in this case, the clones realize it and accept it, which makes it even worse for me.

Next episode may be one of those picker-upper type episodes that involve fun times to help Misaka cheer up, which could help because she seems to be recklessly hell-bent on destroying the cloning facilities.