Well, this series took quite a pleasant, if not unexpected turn of events. Kuroneko asks Kyousuke out, but he says he has some things to think about. But honestly, when a cute girl is the one who ask YOU out, there’s very little to actually think over. I suppose Kyousuke had to sort out his feelings about his sister, even if his choice in phone wallpaper is a bit questionable. While he may not exactly harbor romantic feelings for her, I’m not sure how much better it is to be overprotective and obsessive over her (just look at their dad).

Eventually, Kyousuke does the intelligent thing and accepts Kuroneko’s feelings. This doesn’t stop Kyousuke from being a total pervert though. This leads to some hilarious misunderstandings in the clubroom, with the other members. Apparently, most of them thought that they were already going out (though one of them seemed completely out of the loop from everything). Even Kirino’s pretend boyfriend, Mikagami, thought he was going out with his sister. 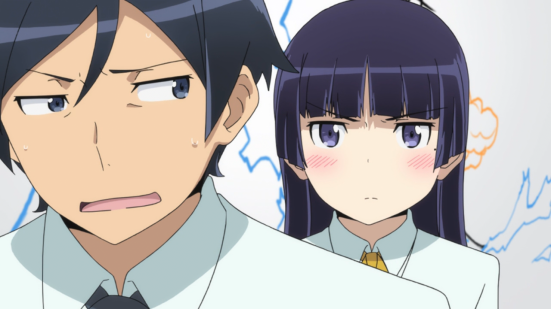 I think the funniest part of the whole episode is when Kyousuke asks Kuroneko if she wanted to touch his boobs and she tells him to go to hell. Their relationship is off to such a great start. It turns out that the both of them have been quite anxious about how to start off their dating situation. While Kyousuke thinks up the dumb things, Kuroneko suggests something much more reasonable: a date.

The ending song features Kuroneko and her sisters and is actually sung by voice actress Yui Ogura (also playing Tsukiko from Henneko). It’s a little strange that they give such a minor character her own song, though it’s funny that Kuroneko threatened to banish her sisters’ dinners to the shadow realm. I’m interested to see how things go on the date next week.