I guess that Muromi being in the middle of the food chain will never stop being a joke. Once again, the entire episode was filled with jokes, but that is kind of its thing. There were really only two things that happened this time around and they were both gags that were revisited. The second one that we got was about Muromi being around during the great journey to land. Apparently, the Coelacanths are afraid of going towards the surface because Muromi stopped their ancestor from evolving lungs back in the day. That fear is still imprinted in their DNA. Muromi did some crazy stuff when she was young.

Levi-san needs to calm down.

Muromi’s lack of presence in the food chain was touched on again during her trip to the antarctic. A group of penguins began to assault her and she would have been eaten had it not been for Levi-san showing up to scare them. That wasn’t the only issue though. A polar bear and a seal tried to eat her during the course of the episode as well. This gag is getting really old if you ask me. Oh well, even I can’t tell you what they have as far as options go with this series. 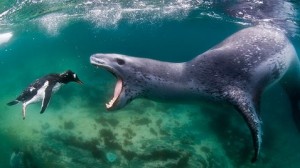 Seals can be pretty scary.

It is becoming a chore to watch this in all honesty. Even the gag that I thought was pretty interesting has been beaten to death. I used to think that the food chain thing was interesting because I always wondered how mermaids would fit into that if they were real. Have you guys ever watched Mermaids the Body Found? It is a pretty interesting special from Animal Planet that gives us a fake history of mermaids throughout their evolution. I enjoyed it way more than I am enjoying this series, but that may be because I am a huge geek. Once again, this episode would have been much better with a heavy dose of Takkun. Stop neglecting the straight man character because he is pivotal to the success of your jokes. I am looking forward to this series being over.