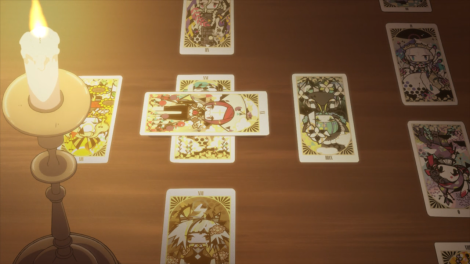 Episodio I – “Dark Spot of the Sun”

So, Mahou Shoujo Madoka Magica is a pretty good series. The only problem with it is that now every remotely similar mahou shoujo series will inevitably be compared to it. While there are certainly similarities, I’ll try my best to treat these two series as two separate entities (as much as I think is possible anyway). Though, I’m sure that most people who are watching this are expecting “Madoka”-type twists to the story.

Gen’ei wo Kakeru Taiyou, also known by its Italian name Il Sole Penetra le Illusioni (both of which translate to “Day Break Illusion”), begins innocently enough. We have our heroine, Akari Taiyou (CV: Mai Kadowaki, Illya from Fate), who is an aspiring tarot card reader and a pretty good one too. She lives with her aunt, uncle, and cousin Fuyuna in a beautiful town by the water that boasts gorgeous Italian architecture. Seriously, I’m loving the setting in this series. 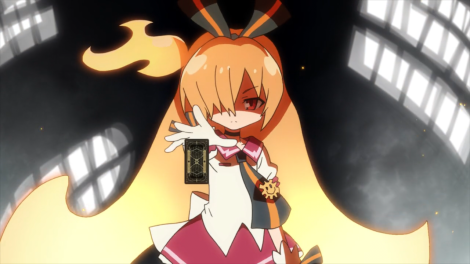 However, things get pretty dark pretty fast as her cousin turns out to be incredibly jealous of Akari’s popularity and grasp of her own life. One night, Fuyuna appears in Akari’s room as a disturbing ivy monster and tries to kill Akari. On the verge of death, Akari awakens to special Tarot powers, hers being of XIX The Sun Arcana which allow her to conjure a blazing sword. In this semi-unconscious state, she unknowingly slays her cousin. The weirdest part of all this is that the events of that day repeat themselves, except without Fuyuna and everyone seems to have forgotten who she was.

The killing doesn’t end there, either. A crazy stalker man enters the fortune telling house and a fire breaks out inside. As Akari rushes in to save her friends but is attacked by the crazy guy who has also transformed into a monster. Unable to stop him, Akari is saved by other girls who have Arcana powers who then kill the crazy guy.

Phew, already in the first episode, the pacing is a bit much to handle. I like that they’re getting directly into the meat of the story, but some leadup or explanation would have been nice, I think. That aside, I love the quaint seaside setting as well as the upbeat score with an Italian flair to it, evident by the occasional accordion accompaniment. The art style is pretty unique too, reminiscent of Disgaea or Etrian Odyssey and makes it feel more like a game than an anime series. Overall, I’m intrigued by what the story has to offer, as the first episode has posed some questions that I want answered.