I really don’t like William. That sounded really odd because it was like I was being hard on myself in the third person. Well, the main character in this series is really stubborn and he won’t accept the fact that demons exist after all that has happened. Oh well, I assume that it needs to be that way for the story to progress.

Hearing my name in an anime is just weird.

Things take off right where we left off in the last episode. William is not happy with the fact that Dantalion is at the school, but he was the one that paid for William’s tuition. It wouldn’t be funny if he was the only one affected by the coming of the demons, so some bad stuff is starting to happen. The first thing is the head of the church getting some bad vibes from the school. I guess the fact that religious stories are real in this world translates to members of the church having some power to sense demons. It seems like that could become a big deal in the near future. Next, we have Isaac who is way too obsessed with the occult. He tried to summon a demon and was almost successful at doing so. Things would have went well, as well as demon summoning goes at least, if it wasn’t for the fact that Sitori stepped in. That Balberith guy is sending everyone to get hold of the elector. He ends up fighting Dantalion and William steps in once again. I guess his ability to stop demon fights isn’t restricted to affecting Dantalion alone. Well, there are now two demons at the school and a holy ring that is in Kevin’s possession. Oh yeah, and regular people can’t see the demon bats that serve Dantalion.

I bet William will try to sell that ring.

I am actually starting to like this show. The connection to King Solomon had my attention and the struggle over Hell could get pretty intense. I am waiting for a fight to last more than thirty seconds because I am a little tired of William stopping fights in such a lame manner. As I said before, I am not the biggest fan of William. The guy is stubborn and his inability to accept what is going on around him is holding back the story’s ability to show off the struggle over Hell. I want to know how important the other humans are going to be in this story because I assume that most of the story will take place in the human realm. I know that Kevin will play a major role, but I like Isaac. He is interesting, but I can see him not being very important to the story moving forward. Back on Kevin, I missed him in this episode. I like hearing Jun Fukuyama, but I did get to hear Yoshitsugu Matsuoka. It was nice, but I couldn’t not hear Sorata and it was making me laugh way too hard.

Magical guy transformations are in.

Sitori went from student to demon through a magical transformation. I would say magical girl transformation, but we aren’t sexists on this blog. In fact, I liked this graphic way more than your usual magical transformation. Why was this one better than the others? There wasn’t a bunch of nude shots that were poorly censored in this transformation sequence. I don’t need that. I guess that this guy will be an important character because he is sticking around at the school. Also, he had a very interesting relationship with Solomon back in the day. Although, it can;t rival what Dantalion once had because he is still getting shit for it. The other demons have labeled him a human sympathizer and have declared Dantalion unfit to rule over Hell. I guess we will be seeing more of that in the near future. I am looking forward to finding out what Kevin knows about that ring. 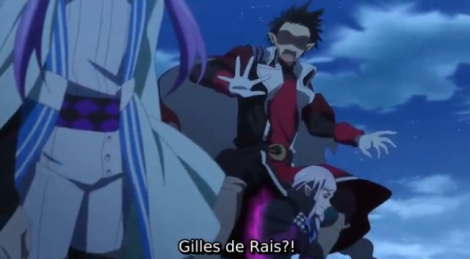 Just a normal entrance through a crotch portal.