Was anyone else creeped out by the way Takayanagi approached Izumiko? First off, he tried to approach her in a forest, secluded away from the main school grounds. Then there was his dumb outfit that made me want to punch his dumb face even more. I guess clothes really do say a lot about a person, and his choice of clothing just made him look like a smug jerk even more. That, or he was auditioning for a part in a new Shakespeare play. 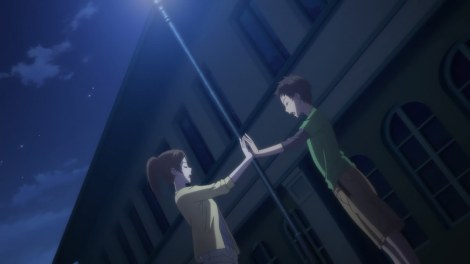 This episode marks the beginning of the big confrontation between Takayanagi and Mayura. With Takayanagi making the first moves and trying to recruit Izumiko, things don’t look so great for Mayura’s campaign.

Still, I was really disappointed with how things played out. For one, none of Takayanagi’s traps and plans worked. He had that trap set up with the balloon and the test tube, but we never got to see what they would have done because they didn’t even work. On top of that, his plan to trick Izumiko failed the moment she realized that she was under his spell. Once that happened, her rage (the first time I’ve seen her so angry!) pretty much spelled the end for his plans.

Another set of failures has to go to the Souda triplets. I really thought that summoning Masumi would help them sabotage Takayanagi’s plans or at least fight off any spirit agents. But all that amounted to was Masumi taking Mayura’s place during the games while she was off worrying about someone from her hometown. Her plan to have Miyuki pretend to be her fiance was completely out of left field, since it didn’t seem to really benefit anyone other than herself. Judging from his reaction though, it doesn’t look like that plan will work either.

Although the main conflict didn’t pan out like I was hoping, we get to see Izumiko unleash her own powers. Her being tricked really set something off inside of her, as it unleashed her spiritual powers and allowed her to easily overpower Takayanagi. That’s what happens when you piss off the sweetest girl in the series. Now that pretty much all cards are on the table, the final episode will have Izumiko deciding the outcome.