I am enjoying this series much more than I ever thought I would. Why is that? Well, the realism is really doing it for me. I like the look into farm life because it reminds me of how much farm life kind of sucks. Sure, it’s rewarding and all, but it is way too difficult. Obviously, this series is going to have a much different tone regarding this subject.

Additives are messing with our bodies.

We got to see another few days on the farm in this episode. Hachiken and company will no longer be waking up at five in the morning in order to take care of the chickens, but everyone has to start their club activities. I honestly can’t imagine doing all of that work and then taking part in an athletic club. There just aren’t enough hours in the day. At least Hachiken is doing well when it comes to his studies. Unfortunately, the same cannot be said about Keiji. He was excited to get ten percent on his math test. I think I rarely ever lost ten percent on a math test. Well, Hachiken was forced to join a club and he ended up at the equestrian club. That was pretty obvious because they already introduced the main love interest. You have to have a way for the two to interact. The majority of the episode was spent on Hachiken questioning his life because he lacks a solid dream. However, a random encounter with the principle gave him some peace of mind. The moral of “spending your youth experiencing things ad not deciding on your future too quickly” was introduced. Things are getting pretty interesting. 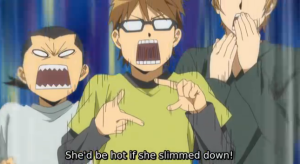 Well, that is true of quite a few fat people.

This may be my surprise hit of the season. Maybe not a top ten quality anime, but something that I think people should definitely watch. It is a new take on the school anime that promotes something that I am a big fan of. Schools that do not solely focus on things like theoretical science, math, and obscure research. I have been a big fan of trade schools for quite a while and I like the way that this series shows how much intellectual work goes into things like farming. People that think farmers are nothing but a bunch of stupid hicks should realize that advancements in agricultural technology aren’t always thought up in some lab. A lot of very important science goes into jobs like running a farm. 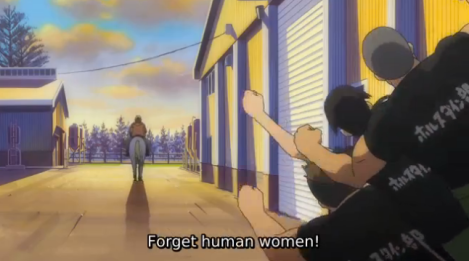 This series is pretty damn funny.

The comedy is definitely a redeeming part of this series. Knowing where your food comes from is something that a lot of people would not be able to handle. Why else would animal rights activists and vegans show people pictures of food processing plants and the unseen parts of farms. It is not a pretty process. Luckily, this series shows things off in a way that is comedic enough to not gross me out. Also, I am still laughing from that crazy cow breeding club. I would say that those people are too obsessed with their trade, but I am in no position to judge anyone for what they like. I mean, I will judge them, but not openly. I am pretty sure that we are going to hit the high school romance stage of this series fairly soon and I want to see how that works out. I like romance, but not every series is written well in that regard. I usually say that the fault lies in the writing of the male protagonist, but this guy is starting to grow on me. We will see what happens.

I am glad that I don’t have to do that yet.