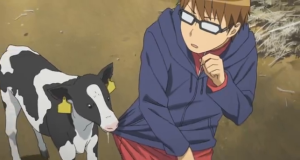 This episode taught us a lot about the important things in life. Working together is an important part of any endeavor. Having fun together is more important than proving that your are better than everyone else. Oh yeah, and pizza is a gift from the gods. 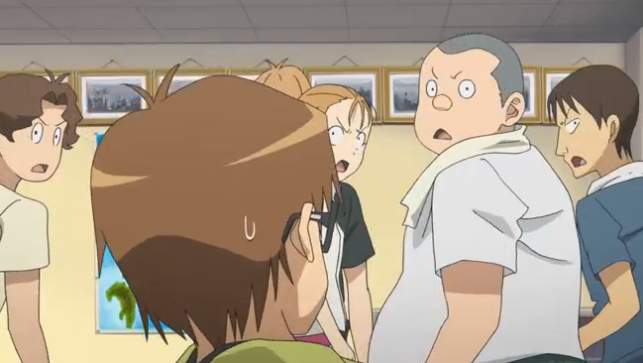 Hachiken ends up getting the top overall test scores in his entire class. He was fairly confident that this would be the one field that he would be able to show off in. Unfortunately, even Keiji beat him on the livestock test. That was disheartening and getting the best overall scores by far didn’t even seem fulfilling for our little city boy. That is unfortunate because that is the one think that Hachiken has. Oh well, he found an old brick oven during a campus cleanup and accidentally let it slip that you can cook pizza in it. The farms are outside of delivery zones for pizza places, so these farm kids are deprived. Their reaction to pizza was like my reaction to good Korean BBQ. The Bay Area has a lot of food, but you have to go down south for quality Korean BBQ. Hachiken ends up spending the week learning how to make pizza and tracking down the ingredients with the help of Aki and Mayumi. After some pizza bribery and a bit of extortion, everything came together. The pizza tastes great because all of the food in this series tastes great and Hachiken is finally starting to loosen up. The moral of the story is that pizza is magical. 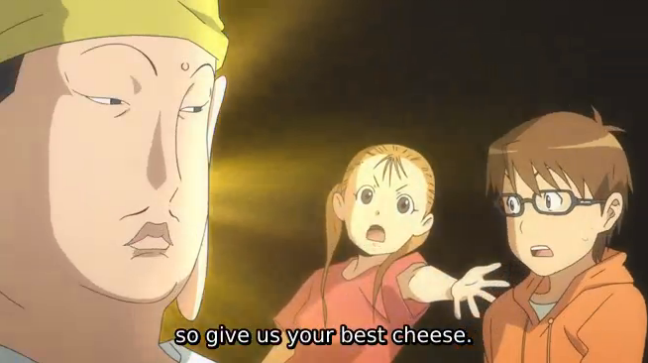 Mayumi is my new favorite character.

I need to make something clear right now. Mayumi is my favorite character in this series. Why is that? First off, I love cheese. Cheesecake, cheese fries, blocks of cheese, they are all delicious. I was waiting for someone in this series to be obsessed with cheese. Basically, if you can make it in Harvest Moon, I expect to see it in this series. I love Harvest Moon by the way. Also, the limited screen time that has been given to Mayumi has made me think that she is pretty hilarious. I love extortion and that teacher is a pretty seedy dude. Betting on horse races and using school facilities for private matters is pretty shady if you ask me. Having said that, Nakajima is a great character as well. I am pretty sure that is the teacher’s name, but if I am wrong, it is because it is not on myanimelist yet and I am too lazy to look it up.

There is a positive message in there somewhere.

Does this series make anyone else really hungry? I know that they bring up the thing about eating stuff that you have seen alive, but that doesn’t matter to me. I have been on farms and that stuff doesn’t really affect me. The food in this series always looks really good and I have to eat afterwards. Unfortunately, I wasn’t able to get pizza today, but I still want some. The pizza from this episode reminded me of the stuff that my friend Brian makes. Using odd toppings like asparagus and bacon is something that he would do. When it comes to the actual series, I am really enjoying stuff. This is pretty much what I expect from A-1 Pictures. A funny series that has redeeming qualities. One thing that has me thinking right now is the future. Not mine, but Hachiken’s. I assume that the writer plans to show life after high school because they focus on career paths a lot. I want to know what happens to Hachiken. I honestly don’t see him becoming a farmer, but I also don’t see him completely leaving the farming world. We are four episodes in and I already want to see the ending. 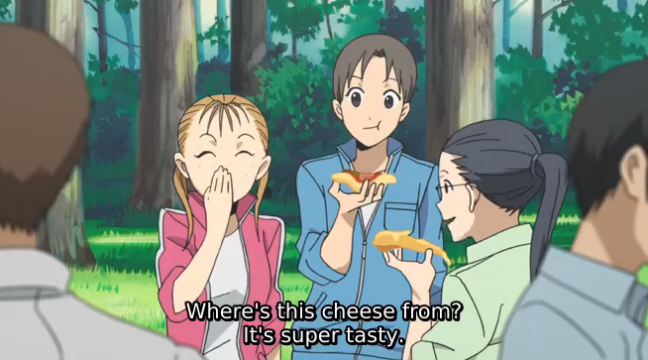