I would like to credit GenGame as a source for most of this information.

Let’s be honest here, the Wii U is not doing very well in the sales department. No one ever thought that it would be killing it, but things have not been going well even when you lower your expectations. It was only last month that the system passed the one million units sold mark in Japan and that was due to the release of Pikmin 3. The pessimist in me says that such a number like that should be cause for alarm and I haven’t even gotten to the really scary stuff. The optimist in me says that this is Nintendo and that quality first party games will eventually get the system off the ground. Anyone that says the system is already off the ground does not know what they are talking about. In this article I will be spending a great deal of time talking about the scary state of the system, but I will be closing on an illogically positive note.

Even major retailers are confused.

Here are some facts that are even scarier than the one million units sold in Japan as of July. Walmarts and various other stores around the world have put their own price drops on Wii U units. Many places sell them at $199.99 even though Nintendo has not implemented a universal price drop. Many stores are requesting one citing the success of the 3DS price drop, but Nintendo stated that they do not plan on dropping the price. If that wasn’t bad enough, many stores have stopped carrying the base sets for the Wii U. Most people have gone for the deluxe set because they have more storage space. On an even worse note, ASDA has stopped carrying the Wii U altogether. They are the second largest retailer in Britain and we know that Nintendo usually gets a lot of European support. Stores are either willing to sell the units at a cheaper price or they are taking them off of the shelves altogether. That is scary. Well, let’s talk about some reasons for the system not selling. First off, Nintendo did not seem to learn from their 3DS flop that release titles actually matter. Super Mario Bros. U can only take you so far. Even the promised titles have issues. Windwaker HD is a remake, Pikmin 3 isn’t as big of a power player in the United States as it is in Japan, and Super Smash Bros. is split between two different systems. Hardcore Nintendo fans probably have a 3DS and that will have Super Smash Bros. as well as a better library of games overall. If you think that Bayonetta 2 will save you, then you need to pack up your stuff and go home. Then there is the problem of confusion. That Target add still shows the Wii U gamepad as an add-on to the Wii. The Wii got a large portion of its hardware sales from people who are game illiterate and wanted something for their kids or dance parties. These consumers are probably as confused by the Wii U as the marketing team at Target and anyone that doubts that really underestimates how ignorant people can be towards technology. Try explaining this stuff to your average parents. Then your casual fans don’t care enough to throw down for a new console. Did you know that the Wii outsold the Wii U in the last fiscal quarter? It did and I would be consulting every deity in existence if I was a member of the Nintendo team.

It looks cool I guess.

I was going to be completely positive in this section, but there are more problems out there. Remember the lack of third-party software support? The Wii U is getting things like Watch Dogs and Batman Arkham Origins, but the titles are far and few in between. A few developers have already stated that making their games work with the Wii U system is just too expensive for the possible reward. Confused ads, a poor library of games, lack of third part support, price drops that don’t work, and losing out to your little brother so to speak. How does one recover from that? Well, Nintendo is trying to pander to their biggest fan base which is Nintendo fans. The virtual console has given us things like Earthbound and Harvest Moon. Nintendo promises twenty to thirty virtual console titles to come out this year. Will a nostalgia attack/a chance to play old games that were missed out on be a system seller? I doubt it, but it can help sales. The Wii U is giving us first party titles that appeal to Nintendo fans. Super Smash Bros., Pikmin 3, Super Luigi U, and various other titles should appeal to Nintendo fans. Unfortunately, the heavy hitters aren’t going to be coming out this year. These things are nice, but they are coming out a year and a half to two years after the initial release of the system. I am not counting Pikmin 3 as a major title because of its sales potential in the United States. I like the GamePad, but not really for the reasons that it was meant to be used. I mostly enjoy the fact that I get my own screen when playing multiplayer games. On that note, I want to try out the pro controller because it is a necessary addition. If it is good, then I will be able to actually play non-gimmick games. I refuse to play shooters or intense action games with a Wii remote because it sucks. The issue is that if it is bad, then the Wii U has no answer to the controller issue. Look forward to a product review in the near future. At this point, you are probably asking where the optimism is in this article. It is right here. If we ignore the fact that there are issues everywhere, then we realize that this is still Nintendo. You know how there is always that asshole that will bring an argument to a stopping point by saying that they are right because of reasons? Well, that is the only argument I have right now. The 3DS was doing poorly, but it picked up when the library grew. I can easily see the Wii U not being in trouble this time next year. I think that it will be playing third fiddle in the console war, but none of the major companies are looking great financially speaking. The PS4 team is recording losses due to research and development costs and the Xbox One is barely recovering after that DRM issue. I would be much more worried about the Wii U if it wasn’t for the instability in the entire market. I will update this later, but a lot of people still have faith in Nintendo even though the numbers would say that they need a new CEO. You can only rely on faith until it lets you down.

What do you think about the state of the Wii U? 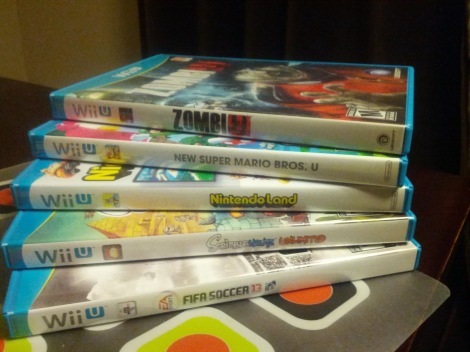 I blame the game selection.