I am going to avoid bringing the provocative shots to these articles if at all possible. Why is that? I am not the biggest fan of the fan service in the first place, but anyone who has reached episode five should simply expect it. If you watch the series for the fan service, then I hope you enjoyed this episode.

Watch out for Super Saiyan Sisters.

The fight to save the goddesses is still going on. Even though Nepgear transformed, this threat has not been neutralized. Our villain can also transform. Not only does she have goddess powers, but she can copy the abilities of others. While watching Nepgear getting beaten up, Rom and Ram decided that they could not sit idly by and watch the massacre any longer and they transformed. I know they are twins, but I honestly don’t think that they need to do everything together. Combination attacks take away from their individuality. The fight went on, but the little sisters were still at a disadvantage. Do you want to know about a very anti-climactic, yet satisfying transformation? Uni transformed while fighting as she was able to focus harder. There was no overly dramatic speech, but there was a transformation. While the fight was going on, the goddesses began to drown in this black energy that was filling up the pyramid. It was slowly killing them and it would have done so had it not been for plot armor. Everything worked out in the end when the little sisters gathered enough energy to defeat the villain and destroy the pyramid that is now magically susceptible to share powers. Shares were lost in various areas, but every goddess not named Neptune regained some ground.

I kind of wanted to see some death in this series.

I actually found a bit of this to be hard to watch. I guess that coming together when times are tough like that and having plot armor magically save everyone is getting way too old. Do I live with it because this is a parody series? I will for the most part. I treat parody series like I treat puns. Even though they seem ridiculously stupid at times, that is what comes with the territory. I was looking for a bit more out of the parody aspect of the series. Can you stretch things if you really think about it by saying that the near death experience of the goddesses is symbolic of the passing of the torch to the next generation of systems? I think a lot, so yes. Even when new systems come out, the old ones are not done for quite a while. Games were made for the PS2 for what seemed like an extra generation. I did like how they showed the goddesses keeping up with their shares. Vert showed everyone the Kinect, Blanc gave out things that would only sell well in Japan, and Noire pushed for power. That was pretty symbolic if you ask me. 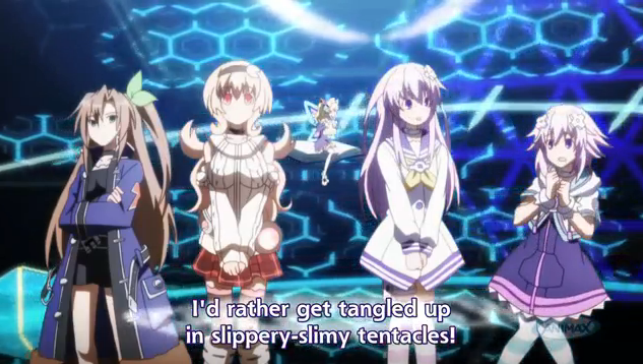 I must say that Vert seems pretty lonely. Everyone else had their little sisters there to welcome them back from what seemed like death. Nepgear had to go over and comfort Vert because this loneliness was that obvious. I think that Microsoft treats that Kinect that it is the Holy Grail and that would probably warrant another character at this point in time. If Neptune gets a little sister, the Vert should too. Oh well, you can’t win them all. I will say that I am glad to see this arc come to an end. It was nice seeing an actual villain and getting the girls to transform, but I think that it dragged on a bit. It was basically like that damn training arc that I will never get over because it baffled me with its stupidity. I would say that this will put an end to the tentacle rape scenes for a while, but I am pretty sure that the main audience for this series is requesting more of the same. That will just be a part of Japanese culture that I will never understand. Oh well, I am looking forward to some nice comedy now that that fight is over.