What did we expect from the war? Actual fighting? That did happen even though it wasn’t great. P-Ko beating someone up? That also happened and it happened more than once. Secrets being revealed? Well, one secret was revealed, but it wasn’t well-kept. Lots of clichés? The biggest “yes” I have given in quite a while on that one.

That is a creepy face.

The war kicked off right away in this episode. Planeptune was the first target, but the “reliable” goddess was nowhere to be found. Nepgear had to hold down the fort, but that did not go so well. Unfortunately, Noire and the others had their own problems to deal with. What kind of problems? Riots in the various countries. Rioters were demanding a lift on age restrictions and they were showing their support for Eden. They were obviously under the same mind control as P-Ko, but that is not obvious to the characters. Neptune finally decides to take up arms after advice from both Noire and Plutia. Those two coincidentally are the reason that P-Ko and the rioters were lifted from the mind control, but we will get back to that. Instead of fighting, Neptune decided to take a beating and reach out to the P-Ko that she knows is still in there. It was kind of working, but things didn’t work out until Noire and Plutia took down the crazy device and transvestite on R-18 Island. The defeat lifted the mind control from everyone, but P-Ko failed to regain her memories. P-Ko and Plutia left for their world because P-Ko is obviously the person from Plutia’s dimension and the damn pudding finally got the memories back for P-Ko. Can we get some answers regarding the client already?

I have never seen this before.

I am not the biggest fan of this series. Does it have fan service? Yes and I do think that it is pretty strong in that regard. People that are looking for it will enjoy what this series brings to the table. I don’t like fan service and that makes this a negative factor for me. As far as the story goes, it just isn’t present enough for me to care. There is a story, but the focus it gets is interesting to say the least. This war arc is technically story heavy, but we didn’t really get any answers when it comes to this client person. At this rate, any actual story closure won’t be achieved for another ten seasons. I do value story in a series that brings one to the table. As far as the comedy goes, they don’t really utilize it as often as they should. If I am going to disregard a lack of story, then I at least need the parody to be a heavier focus of the series. Do I like anything about the series? Well, I do like two things. The parody stuff is nice when we get to actually see it. Aside from that, I like Plutia, but that is because I am a fan of Kana Hanazawa. Unfortunately, this episode did more to hurt my opinion of the series than help it and we are at the home stretch for the season. I haven’t been this turned off by an arc in a while and it is mostly because of the cliché scenes we got. I can’t stand the stuff that they used in this episode. The concept of reaching out to the person still inside by getting whooped and all of this is rarely done well and it was done very poorly this time around.

That is some OP stuff.

Honestly, if they won’t give us the parody stuff on a regular basis, then I would like to get more from the story. This client has access to alternate dimensions, tons of money, and crazy technology that seems like it shouldn’t even exist in an anime. Are the goddesses too stupid to properly look into things? Not really, but they aren’t especially smart either. A certain level of idiocy is required for the series to function the way it does. The only thing that I am really looking forward to is more from the story. I want to know about this client. What is the endgame for these crazy stunts? How does the client have access to all of this crazy stuff? Are we even going to figure any of this out before we get cut off at two season and get stuck in the Gabe Newell zone? For those of you that do not know, that means we will not be getting a third season of a series. I may be a bit critical of the series, but I honestly don’t think that it is good. As far as quality goes, the art style isn’t bad. Aside from that, I don’t know what this series can boast from a technical standpoint. Oh well, I will watch the next two episodes. 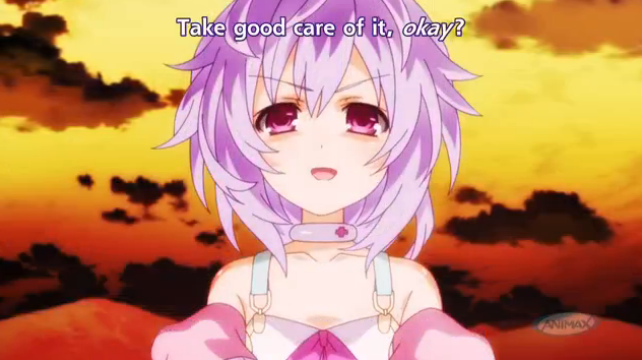 The only good thing about the past few episodes.