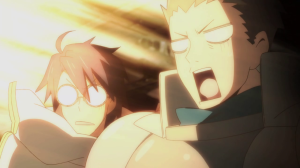 This season seems to have quite a few fantasy series, with Log Horizon being one of them.  Now if you’ve read the synopsis for this series, you’d probably first think of Sword Art Online, as it has to do with people being trapped in an MMO.  Now although the premises are practically the same, there are some notable differences between the two.  Before we go into such details, allow me to give a brief rundown of the story and events of this first episode.  We begin with our protagonist, named Shiroe (CV: Takuma Terashima), who is braving through a part of the online world of “Elder’s Tale” with two of his comrades.  The trio quickly engages in a fierce battle with a pack of evil squirrels, before a killer plant suddenly grabs Shiroe and rapidly drains his hp. 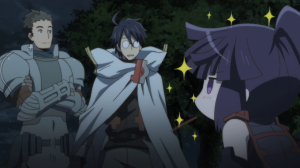 We then flash back to when Shiroe had first awoken in the world with many other players.  Unlike the other players who are freaking out, he decides to analyze the situation and finds that he can use the game menu to call people on his friends list.  The first person Shiroe calls is Naotsugu (CV: Tomoaki Maeno), the knight that we saw in the opening scene of the episode.  Naotsugu is apparently one of Shiroe’s closest friends and turns out to be a comedic character, who openly expresses his perversions.  The two then run into a hooded man in the nearby ruins, identified by Shiroe to be a friend named Akatsuki.  Akatsuki, to the other’s surprise, happens to be a female stuck in a male assassin’s body.  She requests to buy a potion from Shiroe that would allow her to change her into a more fitting form, which happens to be a petite female ninja.  After her transformation, Akatsuki proceeds to beat the crap out of Naotsugu for his perversions.  Naotsugu then convinces Shiroe to invite her to join their party before the three head out to greet one of Shiroe’s acquaintances.  At the grand guild hall, the three are greeted by a cleric by the name of Marielle (CV: Yumi Hara), who engages in some funny antics before trying to seriously invite Shiroe to join her guild.  He strangely declines her offer and heads off with his two comrades to test their combat skills.  We then see them in the scene with the killer squirrels again, where they are struggling to adapt to the game’s system.  Akatsuki somehow unleashes some awesome powers before the gang realizes how to use their in-game skills again.  After the trio effortlessly wastes the monsters, we see a scene where a little girl is being chased by bad-looking dudes, as a humanoid cat watches over them. 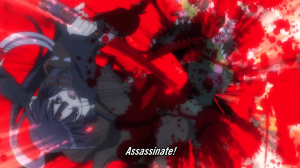 Watch out for ninjas.

So to recap the general scenario, there are thousands of players trapped in the world of “Elder’s Tale” after a twelfth patch was implemented.  The biggest issue for the players is the uncertainty of what happens after a player dies.  While SAO made it crystal-clear that death in-game resulted in death in reality, Log Horizon pushes this fate as a significant mystery.  To further introduce more hardships, the players realize that the world has been expanded with the patch and the combat system is something that they had to re-master.  Another interesting detail that differentiates from the two series is that the players in Log Horizon aren’t exact replicas of how they look in reality, as a part of them reflects their in-game class/race. 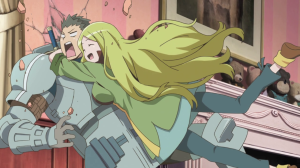 That is a deadly hug.

Now as for my initial opinion of this series, I have actually taken a liking to the overall plot and presentation.  Unlike SAO, which often took itself too seriously, this series is fairly comedic and optimistic, despite the situation.  The characters are very likeable and have entertaining interactions with one another.  The visuals aren’t too stunning, but studio Satelight does a fine job with the action and gaming special effects.  The music is also fitting and the background scenes are eye-catching and vibrant.  Finally, the episode serves as a good introduction and provides a decent pacing to the events, which is a huge plus.  This series has surprisingly caught my attention and will definitely be something I look forward to next week!