If my love for the Raildex series is any sort of indication, any series about kids with superpowers that protect the city is sure to interest me. Here we have Yozakura Quartet, which is an anime that is basically on its third go around in terms of adaptations. Its first two walks around the block involved a normal season and OVA series that condensed the story, staying closer to the manga.

Third time’s the charm, right? Will Yozakura Quartet get it right this time? Well, it’s hard for me to say since I’ve never read the manga or watched the previous two incarnations of the series. But what I can say is that while I like certain aspects of the show, I found it difficult to really get into it. It’s not that I don’t like the characters or setting. I think has more to do with the animation quality and overall presentation, if anything. 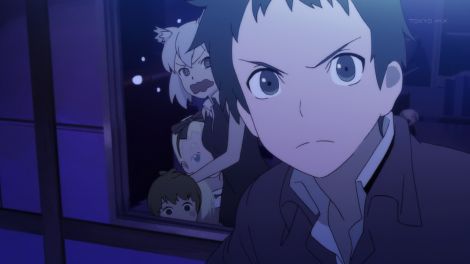 Speaking of characters, we have quite the motley crew on our hands. The main group is comprised of four unique teenagers, three girls and one boy. First, we have Isone Kotoha (CV: Miyuki Sawashiro), a girl with the ability to conjure anything just by describing it. Next, there’s Ao Nanami (CV: Saki Fujita) who has cat ears and can read minds. What part of that doesn’t sound awesome? Then there’s Hime Yarizakura (CV: Misato Fukuen)  whose specialty is just being really strong. Think Shizuo from Durarara!! Speaking of which, Daisuke Ono plays her assistant, which is really funny. Finally, there’s the normal human boy Akina Hiizumi (CV: Yuki Kaji).

I guess I should mention the biggest catch about the city that they live in, which is that it’s inhabited by youkai (or Beasts as some translations might have it). Humans and youkai live together, and this can understandably cause some problems. In this episode, we experience the dangerous of giant goldfish, which requires a group effort amongst the four to stop.

The animation is a bit inconsistent, to say the least. During some parts, it feels like entire frames are completely missing. I do like the character designs, though. What I want to call attention is the rockin’ BGM. It has a very techno and electronica feel to it, which sort of contrasts with the presence of youkai and other such traditional Japanese imagery, like the 7 giant sakura trees. This harmonious interplay between modern sounding music and Japanese mythology is kind of a symbol of the relationship between youkai and humans in the anime. At least, that’s what I like to think.

We really don’t learn much in the first episode, other than the little foreigner girl actually turned out to be some witch working with some shady guy (presumably some sort of youkai). This isn’t to say that all youkai are bad, since most of the main characters are youkai or part-youkai. Hopefully, the series will elaborate more on the backstories of the main characters and how that ties into why they’ve taken on the duty of upholding the peace in the city. I’m liking the action in the series, though I just have to hope that an interesting story will come out of this.