Why not start with a good episode? Honestly, I was supposed to start doing these two weeks ago, but work has kind of been draining my energy. Starting a television show at the beginning of the new anime season was not a good idea. Oh well, expect a back log of these episodes to be up on Wednesday and a review of the first season on Tuesday. What can I say about Book 2 before we jump into things? I think that it is way better than Book 1.

The main focus of this episode is Mako’s investigation of the crime spree currently going on in Republic City. The attack during the peace march wasn’t the only thing to go down. The ships that have been taking the mecha tanks to the Southern Water Tribe have been attacked every time they attempt to leave the waters of Republic City. Mako believes that these attacks are related to the one at the peace march and he continues to try and convince Chief Beifong that the Northern sympathizers are not behind this. It is obvious to us, but that is because we are the viewers. Mako even had to turn to hiring a local gang in order to help with a sting operation. Mako and Asami need to catch these criminals in order to save Future Industries. I was wondering when we would get back to this. After finding out that they were double crossed, Mako and Asami return to her warehouse to find all of Asami’s merchandise stolen. After Mako tells Asami that he has not given up on her, a highly awaited kiss occurred. Then, a trip to one of those movers gave Mako what he needed. The remote detonators are a Varrick Industries exclusive. Unfortunately, Varrick just saved Future Industries. Mako may be on his own. Oh yeah, and Korra has lost her memories.

Look at the corruption of money at work.

I am enjoying where this series is going. Is the stuff with Bolin a little ridiculous and distracting? Yes, but the general purpose of his role as a star is important. Varrick is using his influence to slowly win over the members of Team Avatar 2.0 and that is making him extremely powerful. Only Mako knows to not trust this guy. Here is the thing. I want to know how Varrick is benefitting from this war. The Northern Water Tribe probably doesn’t need any help in the form of supplies and he is purposefully stopping trade to the Southern Water Tribe. It looks like Varrick isn’t profiting from this war continuing. So, how does a businessman benefit from helping the North? I am going to assume that there are nonbusiness motives here. Unless Korra’s uncle is paying him off, then there is something else going on here. Hopefully Mako will smoke this out pretty soon. I do think that this corruption and Mako’s job as a cop have improved the series. We are getting some heavy story stuff that is much more interesting than anti bender protests. Also, Mako’s character is getting even better and that is something that I didn’t think was possible after season one. 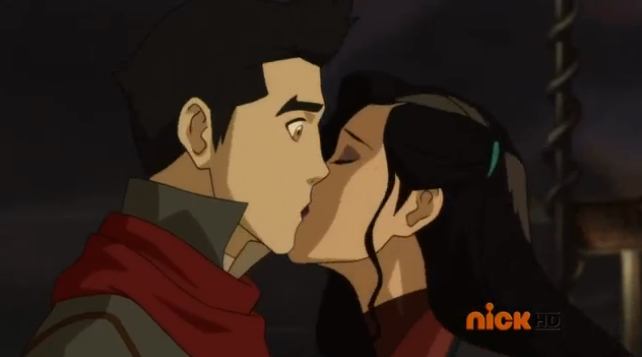 We all saw this coming.

The romantic stuff is what killed it for me in the first season. I am not against romance, but it was definitely poorly written in my opinion. They rushed things and it got too heavy a focus for such a short season. It was like they were treating Book 1 as a stand alone series. However, I do enjoy the romantic writing in Book 2 a lot more than the last one. It just seems to flow much better. That is something that I appreciate. Will the thing with Asami go anywhere? I honestly don’t think so, but I am usually wrong about these things. Away from this we have Korra’s memory loss. What the fuck did that dark spirit do to her? I guess that we are going to watch a journey of self discovery on the fire sage island. That may be a good thing for her since Korra does need to get in touch with the spirits. Does anyone else think that Korra needed a bit of a reset? In all honesty, I think that Korra is one of the things that I dislike the most about Legend of Korra. Most of the characters are great, but I was just never too fod of her. Korra is not Aang, she will never be Aang, and she doesn’t need to be Aang. However, I am not fond of her character. It seems as though she is against character development. We have seen some progress, but she is acting like old Korra again. Yes, her motives are more mature, but I am not seeing what I need to see from her. Maybe that will change, but it hasn’t yet.

I miss the fighting Bolin.