Have you gotten past the CGI yet? Well, you might want to give up on this series soon then. I will be honest with you here. I like this series from a story and action standpoint, but I definitely understand if people can’t watch it. CGI just rubs people the wrong way. This is a fairly popular opinion and I can’t blame people for this opinion. You have to watch the series and the visuals are important.

Every captain playing a lead role in a series is a gambler.

The gang has decided to take on Takao. She is a heavy cruiser that is standing in their way and the option available to the crew appears to be a direct battle. That is rough because it is one submarine against a heavy cruiser, but they have to keep the fight away from the residential areas. For some reason, the Fog won’t attack the land, but collateral damage taken while in pursuit of a sea based vessel is fine. Odd rules for such a dominant force. Unfortunately, some of the tactics that were taken by 401 were a little presumptuous. They used “knowledge” of Takao’s structure to try to evade her sight, but a hidden submarine made that a little tough. Things were not going well until Gunzou decided to use a very risky tactic. They used a Super Gravity Canon that they took from Hyuuga, which was the last ship that they sank, and used it to take out the submarine and shut down Takao. Gunzou chose not to sink her and the crew left on their way to the port. What did we learn from this episode? The naval battles will be intense and strategic and Takao may have a crush on Gunzou.

Submarines are allowed to do that?

This series may have everything that I am looking for in a naval series aside from animation quality. Well, I say naval series for the sake of statement accuracy. I really like seeing the strategic side of war and that is why I enjoyed Code Geass so much. What we are getting from this series is more f that and I am already being drawn in by Gunzou’s style. I hope that they get into the story behind his dad leaving the navy and the fact that Iona was looking for Gunzou. Now I need to talk about the animation. As far as CGI goes, this isn’t that bad. I have stated repeatedly that I understand if people don’t like it, but I would hope that some of you give this series a chance. Do I think that it is the next big thing? No, but I find it entertaining and I know that this series has an audience. Unfortunately, it has come out in a season that is full of so many great series that it will be overlooked. I can’t really say that there is much of a reason to try to get used to the animation of Ars Nova if you are already watching too many things. If only it came out last season. 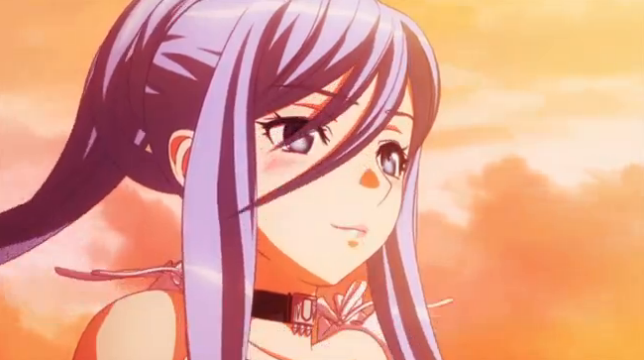 How human are they?

Gunzou obviously views these girls as people because he refused to sink Takao and he continuously questions Iona in odd ways. That is clearly one of the reasons why he was selected as the captain of 401, but I wonder how far this is going to go. Will there be a romance between Gunzou and Iona? Is Takao interested in stealing Gunzou from Iona? Will Gunzou gain a harem of ships? I don’t know about that last one, but it would be the most hilarious idea that I have heard in a really long time. I really want it to happen just so I can try to explain it to people without context. Honestly, that is one of the most entertaining things about watching a ridiculous series for me.

“The anime is about a post apocalyptic world that was taken over by a highly advanced naval force. The only hope for humanity lies in a group of youngsters that are led by the son of a man with a mysterious connection to the enemy. The captain must fight the ships, but his decision to not sink them has caused a harem to form. That’s right, the ships are in love with the captain.” – Me

I want that to be a thing because I think that everyone would get a kick out of that. All joking aside, I am enjoying this series and I want to meet more of the ships. They all seem to have different personalities.

They pulled a Moses.