This is a beautiful series.

This is a series that was heavily anticipated by a lot of people. Avatar: The Last Airbender was ridiculously popular and it made a name for itself as the best animated series from the United States in quite some time. Unfortunately, that can hurt future projects. Legend of Korra looked great in concept, but fans of the original series may not have been ready for something new. This series received a lot of criticism, but was it all warranted? A good deal of it was if you ask me, but there was some good stuff going on. Do you need to watch the first series in order to understand this one? I think that it isn’t completely necessary, but I definitely recommend it. What can I say about this series? Jump into it with an open mind because Korra is definitely not Aang. 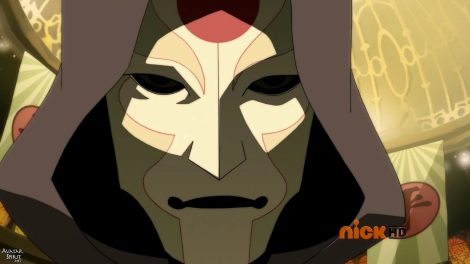 This was an interesting concept.

The people of this world have a deep connection with the Earth. Some of these individuals are gifted with the ability to control one of the four major elements that make up life on Earth. Unfortunately, there will always be struggles over power and benders can easily become tools of war. That is why the avatar, the only being capable of mastering all four elements, is tasked with maintaining balance in the world. This is the Legend of Korra. Korra is a member of the Southern Water Tribe that was born into a very interesting time. Her bending skills are great, but she is quite immature. Luckily, this young avatar doesn’t have to stop a war like the last one. Well, that’s what she thought anyway. Our story takes place in Republic City. This was a city created by the previous avatar that was meant to bring the four great nations together. Unfortunately, it is a city filled with crime and corruption. Korra should be taking an active role in continuing the work that was started by the previous avatar, but she has yet to finish her training. Well, the luxury of neglecting the corruption of the city is taken away from Korra when a group of activists decides that revolution is the key to success. Benders are mighty warriors that are being made out to be the villains here. The Equalists are non benders that have decided they are done with the oppression of the high and mighty benders. What can they do against the police? The Equalists are full of skilled warriors and their leader holds the ability to take away a person’s bending. How will the young avatar and her friends handle this one? 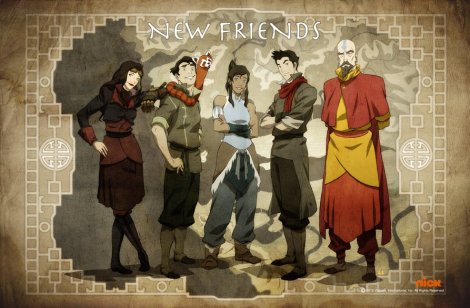 Does every Team Avatar need members of all four nations and a non bender?

The characters in this series are the big draw for fans. Everyone was looking forward to seeing the next generation that would hopefully answer some very important questions. Well, don’t just pay attention to the offspring of the original Team Avatar. This new group has some great new faces that deserve your attention.

Korra is a member of the Southern Water Tribe and the new avatar. She excels at bending fire, earth, and water, but air and the connection to the spirit world appear to elude her. Korra is very different from Aang as we go from a young man raised by monks to a free-spirited young girl that likes to do things her way. Will Korra’s arrogance keep her from fulfilling her duties as an avatar or will it give her the strength necessary to get through these hard times? There is a little of both. Korra is the water bending/avatar member of Team Avatar.

Tenzin is Aang’s youngest son and the only air bender that can teach Korra. Luckily, Tenzin is much more strict than Aang was because Korra needs more discipline. His role as a member of the city council and the man with most important sperm in the world make Tenzin’s life difficult, but he is usually the voice of reason. Just so you know, without Tenzin, there will be no air benders left and his four children are very important because of that. No air benders means no more avatar. Tenzin is the air bending member of the new Team Avatar.

Mako is a young and talented fire bender that has made a name for himself on the pro bending scene. He and his younger brother struggle to pay the bills, but Mako always takes the more mature route. He is the fire bending member of the new Team Avatar.

Bolin is a goofy earth bender that is also a member of Mako’s pro bending team. He is the younger brother and you can definitely tell which one is more mature. Bolin gets into trouble by pursuing ladies and taking bad jobs, but he is a lovable guy. Bolin is the earth bending member of the new Team Avatar.

Asami is a rich girl who is initially introduced as Mako’s love interest. She is the daughter of a very successful businessman that develops all kinds of vehicles such as cars, air ships, and mech suits. Don’t let the pretty face fool you because she is quite the skilled warrior. Asami is the non bending member of the new Team Avatar.

Amon is the mysterious leader of the Equalists. His identity and true abilities are unknown, but he can supposedly take away a person’s bending. The look and nature of the theft is reminiscent of Aang’s spirit bending that made the olf fire lord a normal man, but only an avatar should be able to do that.

We meet various other characters along the way such as Zuko’s grandson Iroh, Toph’s daughter Lin, and many more. Unfortunately, if you are simply looking for answers to which ship made it, then you might be watching the wrong series. Toph didn’t end up with Sokka, but that is pretty much it as of now.

Honestly, if you are looking for more Avatar: The Last Airbender and answers to old questions, then you should read The Promise and The Search. In my opinion, the first season of The Legend of Korra is a bunch of nice concepts ruined by shoddy writing. The series decided that they needed to focus on the teen drama, but it wasn’t even written very well. The romantic stuff felt rushed at best and a lot of the key moments in that regard failed to make sense. There was good stuff. I enjoyed the world that was created and you can’t say that the scenery wasn’t beautiful. The actual conflict was interesting as well. Non benders fighting against oppression is pretty cool. Heck, I even liked a good deal of the characters. Mako was great outside of the romantic bullshit and Bolin is a cool guy. I even liked Asami. Unfortunately, I wasn’t the biggest fan of Korra. Her childish arrogance persisted and I find it difficult to enjoy a series if I don’t like the main character. Is it a horrible series? No, but it definitely didn’t live up to the hype. However, that may be part of the problem. The hype surrounding this series and the established fan base built up a mountain of expectations that could never have been lived up to. I kind of wish that I got to watch this first because I am pretty sure that I would have enjoyed it more that way. It wasn’t bad, but it was great either. I am still a little angry about the drama because I was a big fan of the Amon conflict.

We were going to get a different series.

I don’t think that we have had a series from the United States coming out with this much hype around it in quite some time. Personally, I am the kind of guy that is more pleased with The Promise and The Search than this series. Is that because I am attached to the original run? Probably. They left way too many questions unanswered for me to feel like things are done there.Legend of Korra is something that I could have been on board with. I really tried, but I was critical of it for good reason. It almost felt like the series was trying to function as a stand alone season. The drama between Korra, Asami, Mako, and Bolin didn’t need to go down as quickly as it did. I will always go back to that as something that really hurt the series. Would I recommend this to fans of the original series? Yes, but only if you are willing to watch something that isn’t The Last Airbender because it doesn’t need to be that. Would I recommend this to people who missed out on the other material? I would, but mostly because I want to hear an opinion from someone who is starting out with The Legend of Korra. I think that it could give a fresh perspective on things because this is a heavily debated series. Oh well, there is a second season airing right now that I honestly think is a vast improvement on the first. 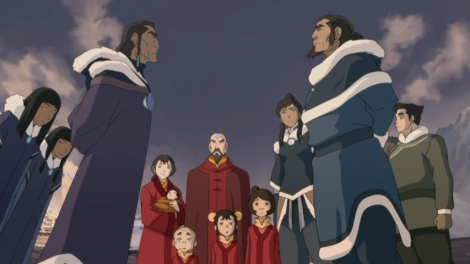