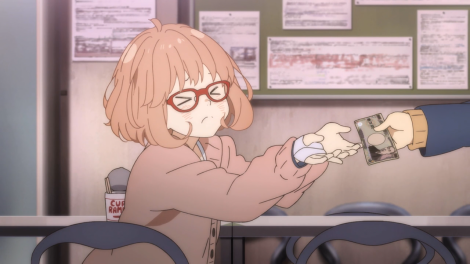 Ah, we’re finally getting into the meat of series and more of Mirai’s past is revealed. That’s a pretty ironic statement since “Mirai” means “future,” but I digress. I’m sure there’s a deep, philosophical reason that can be attributed to this name choice but I’m too lazy to think of one right now. What I AM thinking about is how Kyoukai no Kanata has been implementing a fairly unique narrative style. At least, that’s the impression that I’ve been getting while watching it.

It’s kind of like in media res, but when that mechanic is used the story typically goes back to the “beginning” to explain things. Here, we’re thrown into this unfamiliar world with whole society and rules set up already, and we learn a bit more with each action, story development, and character development. It’s easy to see how it was translated from a light novel series in this way. I can’t say that I love it yet, but it’s definitely interesting. We start off completely in the dark about all of the characters and the nature of youmu, but we just have to take what we’re given and roll with it. 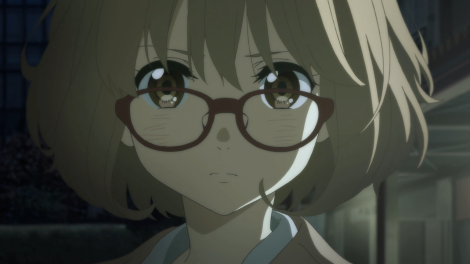 Already in the third episode, there’s a massive threat in the form of the Hollow Shadow, and Mirai plans to confront it, even knowing that her chances of survival are slim. If I’m not mistaken, the Hollow Shadow appears to be the same youmu that possessed Mirai’s childhood friend. After this happened, Mirai accidentally killed her. That actually really sucks, and I feel really bad for Mirai.

Like many other quirky, klutzy characters in anime, Mirai has quite the tragic past. Not only was she shunned for her disturbing blood powers, but she lost the only person she really cared about. That’s why she gets upset at Akihito, because he has friends and she doesn’t. Well, it’s a matter of time before Mirai realizes that she’s already become friends with Akihito. 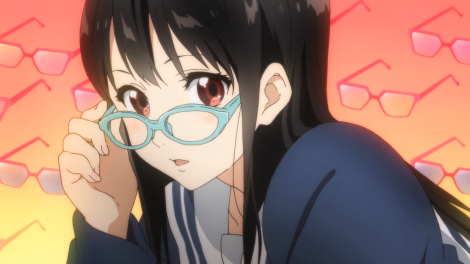 We learn a bit about the Nase family this episode. They’re a group of Spirit Warriors that specialize in barrier magic, seen by Hiroomi’s powers at the school as well as when he fights away the youmu and tries to redirect the Hollow Shadow away from the town. While we don’t get to see Mitsuki use any barriers, she does have what appears to be a youmu of her own at her disposal. It’s like a Pokemon, or something. Also, Mitsuki doesn’t look half bad in eyewear. I’m interested to see how their mother (at least I assume that’s who that woman is) and that man fit into all of this and whether there will be some overarching conflict that the series will build towards.