“CGI” stands for computer generated imagery. It is basically the big thing in production nowadays and it has been that way for a while now. Honestly, CGI is not very popular in my group of friends. We often criticize it and I was thinking of my reasons for not liking it. After looking at everything, there are three reasons for my dislike of it. I understand that it is the future and that you can save a lot of time by using it, but I prefer seeing some of the alternatives at this point in time. I officially apologize to all hand animators that kill themselves already. Oh well, it is time to talk about CGI. 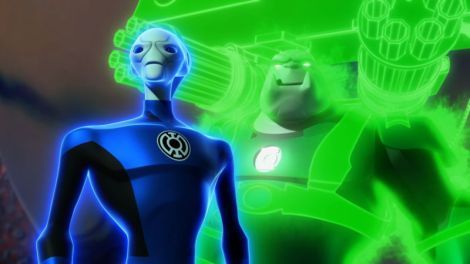 I think that you should watch this series.

The series is bad enough without the odd CGI.

Although CGI itself can look odd in anime and cartoons, I am usually fine with it if the series sticks to one animation style. The thing that really kills me is something that has the standard animation style, but uses CGI to animate the more complex things. Let’s take a look at Infinite Stratos. This series may not be the worst offender, but it does do this. Even though the bulk of the series uses standard animation, all of the mech stuff uses CGI. The reason that this bothers me more than something like Green Lantern the Animated Series is the fact that there is such a huge contrast between the two animation styles. I am watching a regular anime one second and then I feel like I am looking at a low-budget video game. When it comes to anime, I would rather watch something like Aoki Hagane no Arpeggio: Ars Nova that gives us CGI for the bulk of the series. My brain just can’t handle looking at the downgrade in quality mid episode.

This made millions upon millions of dollars.

I will be honest with you. I have been talking about a lot of low-budget CGI. The stuff that we get from cartoons and anime is the equivalent of stick figures when you compare it to the CGI in Hollywood blockbusters. It is true that this CGI looks much better and the contrast between live action and CGI does not infuriate me the way it does with anime. However, I have a different issue with CGI in big budget movies. I think that CGI has become a bit of a crutch in the movie industry. Film makers are able to get by with flashy scenes and they no longer need to focus on things like a quality story or solid acting in order to make money. Let’s take a look at the Transformers series. Most people I know have seen these movies and people will say that they are entertaining. Don’t get me wrong, if your only goal is to make money and give people something that will get their blood flowing, then Transformers was definitely not a failure. However, you should try taking a look at the shallow plot and lack of actual acting sometime. This gets even worse in the horror movie circle. Suspense is no longer necessary if the monsters look cool and scary. Movies like Moonrise Kingdom end up making almost nothing in comparison even though it was a quality film. The effects were cheesy, but that was part of its charm. The acting was solid and the story was great. I know that I sound like a film snob right now, but it irritates me when movies like Transformers 2 makes more money than Moonrise Kingdom.

Oda knows about not getting any rest.

Hey, I am not trying to change the world here. I know that animators of the traditional style are overworked and under paid. I am a fan of manga. It is extremely time-consuming  to animate things by hand and CGI is a good way around that. I just have a problem with the fact that the old style looks better at this level of technology. The future may bring us better CGI that can be used in cartoons and anime for cheap. I honestly see the CGI issues with cartoons and anime being not all that bad. I see solutions coming in the future. Unfortunately, I don’t see the film industry changing anytime soon. This is a capitalist society and making money is really one of the most important things out there. If it wasn’t, then you wouldn’t charge people to watch your movie. As long as the special effects make money, there isn’t a great deal of desire to change anything. I know that I am essentially calling the writers and directors lazy at this point, but don’t get me wrong. I will not call the animators lazy. The more the film makers rely on the special effects, the more those people have to work. Overall, I have a problem with CGI in general at this point in time and I am hoping that things can change no matter how unlikely that is. Oh well, that is enough of me. What do you think? Do you like the way that CGI is used in anime and cartoons? Does the animation style bother you at all? Are good special effects enough to make you pay to see a movie? Did you like Moonrise Kingdom?