Well, at least Sawamura is starting to get recognized for his talent. The thing about athletes is that the big mouth can get you into trouble, but those that are necessary for victory will always get a job. It may not be the first string, but the second string is a pretty big step up from running laps during practice. The tire must stay, but some real games will be played soon and that excites me.

The episode starts off after the end of the game between the first-years and the older players that are looking for a chance to join the active roster. The first-years lost horribly, but there were a few big things that came from the game. Masuko returned to the first-string after his batting display and the guy decided that he could talk again. Tanba has regained some great confidence and he is going to start practicing with the first-string again. Furuya is going to practice with the first-string and Miyuki tamed the kid by catching his pitch. Sawamura and Haruichi got upgraded to the second-string for practice purposes and Sawamura is starting to form a battery. It may not be with Miyuki, but it is a start. Unfortunately, this start is starting to get to Sawamura. Chris is a serious and gloomy guy that has done nothing but denigrate the young pitcher. The training should be helpful, but the two are not getting along as well as they should. Oh well, Sawamura does have a long way to go if he plans on becoming the ace of the team. 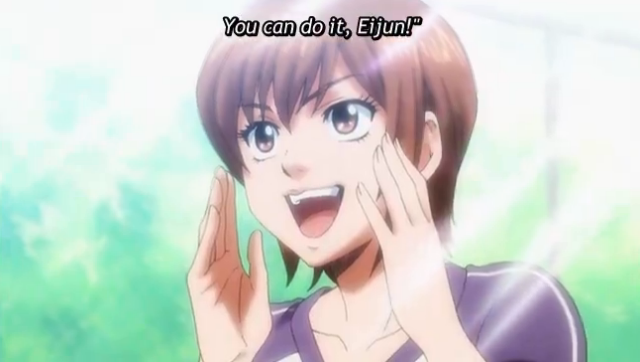 I am looking forward to the childhood friend reunion.

I am very excited about the future of this series. Why is that? Well, we are going to see some actual games. That is a good thing because I think that the animators are doing a fantastic job with the game animation. Did you see the fielding by Kuramochi and Kominato? That stuff was pretty cool if you ask me. Pitching will involve a lot of drama and batting will provide the pivotal scoring in the games, but the fielding is what will bring the true action. The great skill that the players have shown as fielders really impresses me. I think that this is a very under appreciated aspect of baseball. Pitchers and big hitters always get the spotlight. Unless you really understand baseball, then fielding isn’t always given the credit that it deserves. That is why I like “Web Gems” on ESPN. That is a segment that gives us the best plays in baseball and it often features fantastic fielding. Great stuff if you ask me.

He would know as they took a bath together.

I am excited to see the battery that features Chris and Sawamura. Why is that? Well, I think that Chris is exactly what Sawamura needs. A serious guy that will not follow Sawamura’s pace. The technical side of baseball is what Sawamura needs to learn. Everything that Sawamura has done as of now on that mound has been purely instinctive. Unfortunately, raw talent is not the only thing that is necessary for victory. There is some important strategy involved. A lack of control over your pitching can make or break a game. The catcher is more than just a target and that means that the pitcher needs to actually listen to the guy behind home plate. I would like to know about the origin of “Chris” as a name. Is the guy from America? I know that getting players from America is a common occurrence in a sports series, so I would not be surprised if that is the case. Unless something changed recently, I don’t think that “Chris” is a popular name for children in Japan.

These two intrigue me.