This is amazing. Very Shaft. Wow. Those are the notes I jotted down while watching the episode, and I had planned on deleting them but they’re just too funny. They’re also a pretty good description of what the series is like so far. If you’re looking for a serious yuri anime, then look no further than Sakura Trick. In terms of advancement of romantic progress, it completely blows away any conventional love story.

Yes, romance is nice and it (i.e. sex) is pretty much the driving force behind everything. But for some reason, I can’t get myself to really care about boy/girl couples in anime. On the other hand, I find myself “shipping” a lot of girl/girl pairs. I use quotes because I’m hardly a serious shipper at all, not because I don’t think you know what the term means. Maybe I like yuri pairs because guys just tend to ruin everything they’re involved with. Wouldn’t you agree, ladies? *wink* 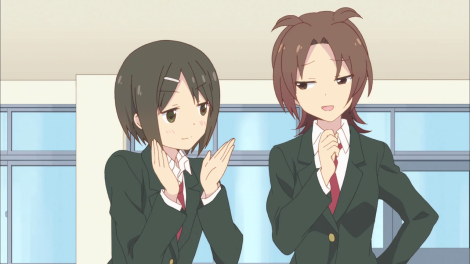 Alright, I’m done being politically incorrect and all-around creepy. To put it simply, Sakura Trick already feels like the best yuri that anime has to offer. The focal points of the series are the two childhood friends, Haruka Takayama (CV: Haruka Tomatsu, also Asuna in Sword Art Online) and Yuu Sonoda (CV: Yuka Iguchi, also Index from Toaru Majutsu no Index). I love how similar the names are to the seiyuu’s. Other than these two, the other seiyuu are fairly unknown. A few of them are completely new, and I think it’s really cool that they get the opportunity to work with big stars like Haruka Tomatsu and Yuka Iguchi.

In just the first episode, Haruka and Yuu share a handful of kisses on different occasions. Not even the small pecks in conventional romances, but full-on wet kisses. I admit that I wasn’t really expecting that, and I would almost prefer some restraint but I guess this works too. In addition to the main pair, we have four other main girls who have already more or less been paired up by the show. I’m excited to see more of them in the future and how their romance blossoms (if at all).

As I stated earlier, Sakura Trick gives off a very Shaft feeling to it. It has the quick cuts, it has the abstract background patterns, and it has the comical expressions. I guess it’s only missing the frequent zooming, but that probably requires too much budget. Personally, I kind of prefer this style of animation over what Shaft puts out. The animation style changes appropriately with the mood of the scene, without imposing a pretentious atmosphere that almost insults the viewer.

Each episode is divided into two separate mini stories, keeping humor constant and interesting. It’s what you would expect from a 4-koma manga adaptation. Definitely, the main draw here is the yuri and excellent animation. Not only is it artistic (and not excessively so), the character designs look great without any noticeable loss of quality from scene to scene. The comedy works well too, drawing off of the little interactions between the characters and the often resulting misunderstandings.

You know that feeling when you’re super excited for something that you can’t wait until you get to do it? For some reason, I had that feeling while watching Sakura Trick. Like, I wanted to watch more even though I was already watching it. I think that means I really like the series. I won’t say that everyone will like it, but you shouldn’t be put off by the yuri or ecchi. The comedy and animation are things I think everyone can enjoy.

Check out Sakura Trick if you prefer romance without the Y chromosome, underrated animation quality, and genuinely funny characters.

“Let’s do something that other girls would never do!” ~ Yuu Sonoda