In stark contrast to Nisekoi’s lovey-dovey rendition of Romeo and Juliet, we have quite a dark take on the popular Shakespearean work. Well, I guess considering the twists and turns the original has, this rendition holds a little more true to Shakespeare’s intentions. For the record, I keep typing “Sharkspeare” for some reason. My brain must have just shut off right after finals.

Anyway, if this series was going to go with the whole one character per episode thing, then it wasn’t going to make it by the end. That’s why it makes to put two characters together! If it was going to be any pair, it was gonna be Hitsugi and Chitaru which was probably obvious to most people. Though, outside of the fact that they were the most canon couple in the series, we didn’t really know to much about them. It just seemed like Chitaru was always bodyguarding Hitsugi because she was really frail. 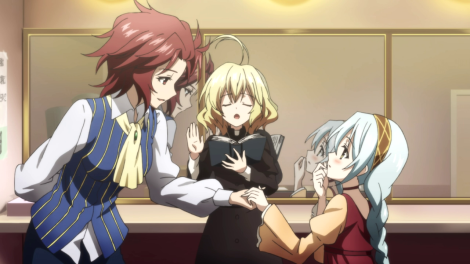 Well, as is always the case these days, looks are quite deceiving because it turns out that Hitsugi is the legendary serial killer, Angel’s Trumpet. Coincidentally, she’s responsible for killing a woman important to Chitaru and is the reason Chitaru entered Class Black. Of course, when she discovers the truth, Chitaru is torn between what she wants to do. Dead set in her commitment to kill Angel’s Trumpet, she lunges towards Hitsugi in the middle of the play but isn’t able to go through with it in the end.

In keeping with her promise to help Chitaru take down Angel’s Trumpet, Hitsugi stabs herself with Chitaru’s dagger and kills herself. Nio then reveals that Hitsugi’s wish was to stay with Chitaru forever, which is why she sent her notice to Haru after finding out Chitaru’s true motive. In her despair, Chitaru drinks Hitsugi’s poison to join her, all under the guise of the play in front of the entire school.

It’s really an incredible anime adaptation of the play, especially since it’s always done in anime but never seriously like this. It’s also a sign that the show isn’t afraid to kill off people. Despite being about assassins, I thought everyone was going to survive somehow and it was looking that way. Although Shiena is hospitalized, I think she’ll make a comeback in the near future. There’s the slight possibility that Hitsugi and Chitaru aren’t dead, but I wouldn’t get my hopes up everyone. Other than all of that, it was nice to see everyone from Class Black dress up and work together to put on a show for everyone.

“It really does worry me that a girl like you is in Class Black.” ~ Chitaru Namatame