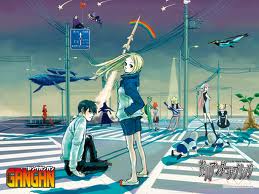 Our last episode of season one has a lot of the minor characters brought into the light. The men of the village go down to see Samurai who runs a barber shop called Last Samurai. I would say that this is another crazy person that claims to be something that he isn’t, but he cuts everyone’s hair in almost no time with his katana. That is, until he gets to Sister. Feeling the warrior’s aura, Sister instinctively defends himself against the hair cutting sword technique which results in an oddly timed battle. Recruit leaves this mess and runs into Billy and Jacqueline. Billy claims he is a parrot and Jacqueline a bee which is obviously impossible and Recruit quickly avoids the two as he overhears a dramatized conversation about their relationship. Our real story hits when the students at Recruit’s school, the Metal Brothers and Stella, want to do something fun. Recruit decides to make an amusement park, but is at a loss regarding how to make one. The other residents see Recruit struggling and take it upon themselves to pull through for the kids. The attractions are what I expected. Dangerous and ridiculous, yet the children and truly excited to experience the fun. Going through to park with the kids is really fun for Recruit and brings back memories of when he went to a park with his dad. Honestly, a very heart warming episode.

I am afraid of roller coasters.

I am really happy with the first season of Arakawa Under the Bridge. A great mix of beautiful animation, ridiculous humor, emotional growth, and social satire. The introduction of more minor characters was obviously meant to lead into the next season and I am very excited to watch that as well. Look forward to Arakawa Under the Bridge x Bridge.