Time to change the world.

This series was definitely the biggest surprise of the 2012-2013 Winter Anime Season for me. Maoyuu Maou Yuusha was my second to last pick in our draft of series to cover because I didn’t really know a lot about it going in. I was basically stuck with it because the story starred a hero and demon king. Bryan and Daniel aren’t really the biggest action series fans. I saw busty demon king and immediately thought that this was going to be a chore to watch. However, you can’t go around judging a book by its cover. I am a large white man who rocks facial hair and loves football so most people wouldn’t peg me as an anime fan. Well, let’s just say that things can deny your expectations. Arms has brought us what I can only describe as an extremely unique experience that we haven’t seen in years.

Without agriculture, we would all starve.

Have you ever wondered if we weren’t alone in this world? Well, you rarely are. In universe that humans share with demons, conflict is inevitable. Whether or not we like to admit it, we do not accept those that are different very well. We all know that person who is a racist. They think that a certain group of individuals is bad due to differences that do not define them and the majority of us can recognize that as an irrational way of thinking. However, our general acceptance of other has really only come with time. Over here in the United States, we have gradually begun to end inequality. We ended racial and gender based voting restrictions, but things aren’t as cool as they should be. Have you noticed that today’s accepted prejudice is now homophobia rather than the outdated racism? If we can’t accept others for a choice that in no way negatively affects our lives, then how is a medieval society supposed to communicate with demons and vise versa? Well, the human and demon worlds are at war and the human race’s hero has gone off on his own in order to slay the demon king. You know, that mighty brute that hungers for conquest. Wait, the demon king is a female scholar? That is our story. Luckily, when scholars are in charge of things, we have a better chance of actually getting things done. These are the kinds of people who will give you a nice technical analysis of things and try to make sense of them. War is bad right? Not always. World War II ended the Great Depression. At times, war is necessary for the well-being of nations and that is the ugly truth of our world. However, there should be another way. Maou has a plan, but she needs Yuusha’s help in order to pull it off. This particular plan requires something that sounds pretty crazy so try to stay with me here. How about we work together to solve the world’s corruption through scientific advancement rather than conquest?

I wish that these characters had real names rather than titles.

One of the things that I found charming at first, but quickly became highly annoying, is the fact that the characters in Maoyuu do not have actual names. They are instead referred to by their occupation in life as a proper noun. We meet quite a few characters along the way that you can’t just disregard. Whether your name is in the title of the anime or you show up on occasion, this series makes sure that you do your part to keep the story moving along. Yuusha is the hero from the human realm. Although he has the power to defeat entire armies on his own, Yuusha is still emotionally inexperienced which leads to him being weak around women. It is this weakness that allows Maou to delay her inevitable death long enough to convince Yuusha to become hers. Maou is the demon king and a schol. Although she lacks the raw power of the previous kings, Maou holds a great deal of intelligence that can help lead both the human and demon realms towards an era of prosperity. Both Maou and Yuusha are very inexperienced in the romantic department, but the promise of ending the war peacefully has allowed the two to agree to what is essentially a marriage. Onna Kishi is a female knight that traveled with Yuusha prior to the attack on Maou. Her skills are great and Onna Kishi is as loyal as they come. However, her obvious love for Yuusha complicates things when the union of Maou and Yuusha remains undefined. Head Maid is an old friend of Maou’s with a very interesting skill set. She possesses both great battle skills and household knowledge which makes her the perfect partner to a physically weak demon king. Big Sister Maid and Little Sister Maid are runaway serfs that were taken in by Maou and taught by Head Maid in the way of the maid. They, along with quite a few others, take Maou’s teachings and spread them across the land. Throughout the story we meet leaders from both the human and demon realms that end up as both allies and enemies of Maou’s cause. I would be more specific if this wasn’t already running a little long.

I was not expecting such a serious story.

Let’s take a moment to thank series like Spice and Wolf for allowing a story that revolves around old school economics to be respected by the mainstream media. I was honestly not expecting what we ended up getting. Sure the romance between Yuusha and Maou was obvious, along with the war between the human and demon realms, but it was the more intellectual parts of the story that got to me. There is a heavy focus on the economy, technological advancement, and the corruption that comes along with hierarchies. I kept wanting to see the big time action scene because the world was at war, but that wasn’t really necessary. Tension was created by the manipulation of the world from behind the scenes. Showing us what effect inflation can have on an economy and the power of a group banding together even when they lack power really gave us a history lesson of sorts. We sure as hell didn’t fight demons, but currency has changed and the serfs did have to gain their freedom at some point in time. You were constantly reminded of the medieval time period that Maoyuu was set in due to the various technological advancements being made. From growing potatoes to curing smallpox, these are things that no longer make us worry. I cannot stress enough just how refreshing it was to encounter a series that went after the things that Maoyuu did. I never thought that economics could be so entertaining. Obviously, we didn’t just get a twenty-three minute lecture every week because this is still an anime. You can’t ignore the fun and innocent romance that we are given and I am still waiting on more intimacy. 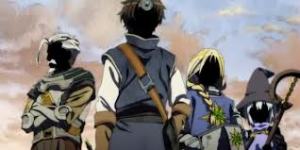 I want to see this group in action together.

Maoyuu Maou Yuusha gives us an odd mix of extremely realistic and so outrageous that shounen writers would question your methods. The great thing about this story is the pacing. Obviously, you can’t see the true results of technological advancement in a single season of anime. The way in which the writers skip giant gaps in time without making us miss out on all kinds of events and character development is something to appreciate. The ending was left open for more and I do expect to see another season of this anime even though it may take a while. We need to appreciate things like this because they were once thought to be sure flops. Spice and Wolf had to give it quite a few goes before it was taken seriously and fans of the series will tell you that it is definitely worth your time. Let’s hope that Yuusha and Maou can bring things to an end in their respective lifetimes.

I wish there was a little more romance between Yuusha and Maou in this series.