The tsundere trope has become a staple character in a lot of anime in recent years. It’s easy to spot one if you pay attention: a young girl can seem unapproachable and aloof towards the protagonist. Perhaps she’s even harsh towards him and looks down upon him constantly. She’s always irritated and annoyed by the protagonist and there never seems to be a good moment between them. Yet as soon as they’re alone, her face turns red. She tries to do things for him without him knowing, or perhaps deny that she did something in his best interests. No matter what, she’ll always try to deny that she holds affection for the protagonist, although it slowly becomes more obvious that she’s in denial with herself.

Aside from having the funniest interactions with the characters, I always seemed to be drawn to tsunderes as one of my favorite archetypes in anime. You watch them slowly gain confidence in themselves, and in doing so, they allow themselves to drop the barrier surrounding them and open up more. Here I’ll be listing my favorite tsunderes in anime.

It’s not like I WANTED to though! It’s just…everyone else did something like this already, so I thought you might want to read something from me too. Just…consider yourself very lucky that you’re getting to read this!

I feel like I can’t do a Top Tsundere list without mentioning the “Queen of Tsundere” herself: Rie Kugimiya. She became famous for her roles as Nagi in Hayate no Gotoku, Taiga in Toradora, Louise in Zero no Tsukaima, and Shana in Shakugan no Shana. She’s usually typecast into roles of short per-pubescent girls with short tempers, flat chests, and tsundere antics. My favorite role of hers would be Shana, the titular Flame Haze from Shakugan no Shana. Her fiery temper is the perfect fit for her fierceness in battle, and is shown as one of the stronger Flame Hazes in the show. When not fighting Crimson Denizens, she is seen bickering at Yuji, often yelling her now famous “Urusai urusai urusai!” phrase. She eventually warms up to Yuji and develops strong romantic feelings for him, to the point of jealousy whenever he interacts with another girl in his class. Kugimiya’s portrayal as Shana, along with her other three prominent roles, more or less established the tsundere trope as a popular one, and her involvement has definitely helped keep the trope alive for so long. 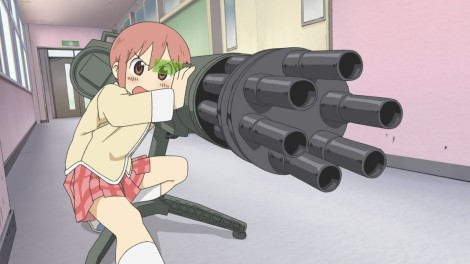 This is probably one of the most hilarious examples of the tsundere character type. Misato is constantly at odds with Koujirou’s strange habits and pompous personality. Yet with all of her fussing over him, it’s obvious that the reason she calls him out so much is because she likes him a lot. Where most tsunderes would at this point call their crush names like “baka” or try to deny any form friendliness towards them, Misato shoots him with a seemingly never-ending supply of artillery. Her inventory of firearms ranges from the basic pisols, machine guns, grenades, RPGs, and more. Despite the constant barrage of bullets and explosives, Koujirou always manages to survive and remain oblivious to Misato’s affections, which only further infuriates her. 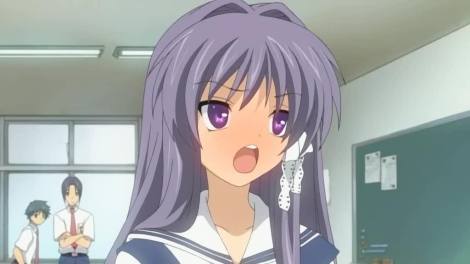 Probably my favorite girl in the Clannad harem, Kyou is a classic tsundere. She doesn’t hesitate to mouth-off her opinions to Tomoya and seems to always treat him with a measure of disdain. From a bystander’s point of view, her interactions with Tomoya would indicate that they are close friends. Deep down however, she is in love with him, and despite her twin sister being in love with Tomoya as well, she decides to put aside her own feelings to try and hook her sister up with him. It’s a heartbreaking decision for her, and we all know that all she really wants is for Tomoya to return her feelings. A what-if episode further explores what would happen if she lost her self-control and tried to make an advance on Tomoya, with both heartbreaking and touching results. A tsundere with troubled emotions, Kyou is one of the best written characters in Clannad. Plus, Grade A zettai ryouiki, amirite?

Senjougahara Fascination. How else can you describe one of the best characters in the Monogatari series? Initially quiet and aloof to everyone, she isn’t afraid to get rough. Matching her sharp wits is her even sharper tongue, which spits out insult after insult at Araragi-kun. She even calls herself a tsundere at one point, with Araragi joking calling her a “Tundra” instead. Her ice-cold personality and sharp tongue make her seem more like a b***h with a thesaurus than an actual tsundere, but she does develop romantic feelings for Araragi that are gradually more pronounced throughout the series. However, her deadpan delivery and unchanging facial expressions makes it incredibly difficult to tell when she is joking and when she is full-on serious, that it leaves Araragi constantly on edge with her.

Christina. Assistant. The Zombie. Celeb-7. Call the 18 year old genius any one of these names and she will surely go off on you for calling her names. The 4th Labmem of the Future Gadget Laboratory reluctantly joins after witnessing the Microwave-o-phone’s unusual properties and sticks around in order to study it more. Okabe’s chuunibyou antics constantly get on her nerves however, and often has to put up with his wild delusions and arrogant personality. However, her secret hobby as an @channel poster is something she would rather die than let people know about, and is quick to blush whenever she accidentally lets slip some internet lingo. Her tsundere personality even gets pointed out by Daru, with hilarious results. With Okabe, her harsh side gradually gives way to a much kinder personality as he begins to open up to her throughout his journey, and despite his traversal of different world lines, she ends up falling in love with him over and over again.

Kyon will always be my favorte tsundere. The poor everyman of the SOS Brigade desperately wants to live a normal life, but Haruhi’s constant meddling makes it difficult to have an average day. His ongoing narration is full of amusing jargon, from quoting philosophy to making obscure pop culture references, that makes him seem anything BUT an average high school teen. In addition to that, his monologues reveal his true personality as that of a snarky cynic who is always ready to fire back a sarcastic remark to every odd thing that happens in his life. I can’t help but laugh whenever Haruhi pushes him to the limits of his patience. Seriously, his rants are the best parts of the show. Despite having his patience worn thin nearly every day, he does care for his fellow Brigade members, although he believes that admitting to himself that he cares about Haruhi is a sure sign that he’s finally lost his mind.

So there you have it. Those are my picks. What are your favorites?

One response to “Top Picks – My 5 Favorite Tsunderes in Anime”