This concept is genius. Even though I’ve only seen Fate/stay Night and the first episode of Fate/Zero, this first episode of the magical girl spinoff still proved to be quite entertaining for me. I think fans of the series will find much enjoyment in seeing familiar faces in a completely different setting than what they’re used to. Even as a stand alone mahou shoujo series, Fate/kaleid is actually pretty solid, combining tongue-in-cheek humor with cutesy magical charm.

The star of this spin-off is none other than the young Illyasviel von Einzbern  who’s contracted by a sassy talking stick named Ruby. Interestingly, the two “original” mahou shoujo are actually Rin Tohsaka, who you all should know, and Luviagelita Edelfelt, a girl who never appeared in either of the two Fate series. I think I’ve already taken a liking to Luvia, just because she’s played by Shizuka Itou (one of my favorite seiyuu) and acts like an ojou-sama. That combination is simply hilarious.

After a literal falling out with their respective scepters, both Rin and Luvia are stripped of their mahou shoujo powers. Rin’s stick, Ruby, seeks out a young heart who would be willing to become a magical girl. This search leads her into the bathroom of Illya. After a bit of deceit and coercion, Ruby gets Illya to fulfill the contract. What magical girl contract doesn’t involve trickery these days? What follows is one of the nicest quality, animation wise, transformation scenes I’ve seen in a while. It’s what I’d imagine Sailor Moon would look like, you know, if that remake ever came out.

Unfortunately, the animation is a bit weird in my opinion. Maybe it’s something about how the eyes or mouth are drawn, but it kind of rubs me the wrong way. I like the character designs and all, but I guess the animation itself is something I’ll have to get used to, even if the series is only ten episodes. At the end of the episode, we learn that Illya’s task is to collect Class Cards, based off of the warrior classes such as Archer and Saber. I’m interested to see how those characters play a role in the story. Shirou plays Illya’s stepbrother in the series, and I’d love it if Saber (my favorite Fate character) made an appearance as well. 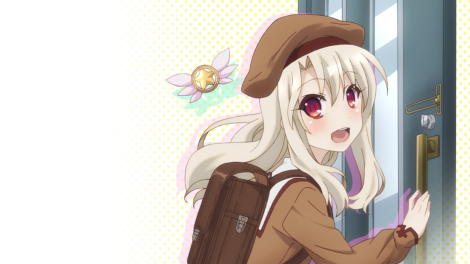 From the looks of it, Fate/kaleid intends to be a conventional mahou shoujo series, which is great because I’ve been looking for a nice fun magical anime to watch for a while. The comedic value of the series has been great so far, like Ruby’s cheekiness or Illya innocent ineptitude or Rin’s angry outbursts. The contrast to the main series’s serious atmosphere is great as well. Definitely looking forward to more of Fate/kaleid.