Death in this series is very interesting. This isn’t like Dragon Ball Z that makes death more common than taxes, but people don’t stay dead in a lot of situations. Things get pretty intense in this episode because philosophies change, people question their loyalties, and Hibiki is on the brink. 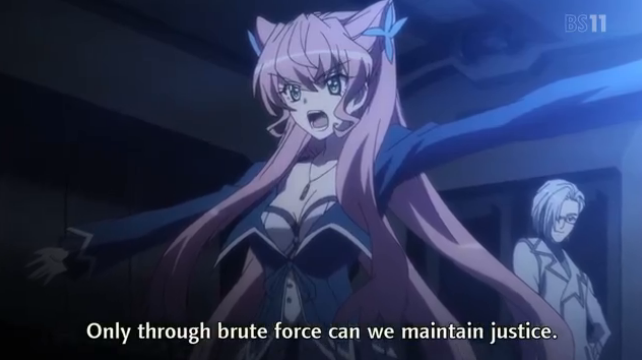 That is a philosophy that I am kind of on board with.

We all saw Miku “die” in the last episode. Well, that pretty much took the wind out of Hibiki’s sail. Her transformation went down, but Tsubasa and Chris were there to save the day. Mostly Chris because she brought back her Mega Death attacks. I really enjoy those. After this, Chris tried to talk to Tsubasa, but that did not go well. The idol is far too strict and she is blaming herself for everything. Things are not going well on the other end either. The jig is up and Dr. Ver is starting to further manipulate the girls. What makes this even worse? Maria has decided that the doctor is right and that they must use force in order to obtain justice. This does not sit well with the other girls, but it is definitely happening. Oh yeah, and Miku is alive. She is being held prisoner by Dr. Ver. The Finé have launched an attack on a carrier from the United States, but Maria is having trouble with this. Our heroes tried to stop them, but a surprise guest showed up to the party. Miku has been drugged and forced to use a symphogear. That was highly unexpected.

Those are some drugged eyes.

I am very mixed regarding this series. Let’s start with what I like about it. We are getting to the point where people question the validity of both their motives and methods. Maria has started to turn to the dark side even though she still clearly cares about the well-being of others. War for the sake of peace is a concept that has been heavily debated for as long as man has gone to war. Even though they originally wanted to save as many lives as possible before the moon falls in a decade, that does not seem to be easily achieved. Did they start off on the wrong foot? Of course they did, but they had to get the truth out somehow. The government is lying to the people about the rate with which the moon is falling. Wait, they haven’t revealed that to the people yet. Maybe they would have some actual support if they started spreading that knowledge to the people. That, or they call the terrorists crazy for suggesting such a thing. Hindsight is 20/20. All I know is that the girls of Finé are not on the same page and they have added a drugged Miku to the equation. 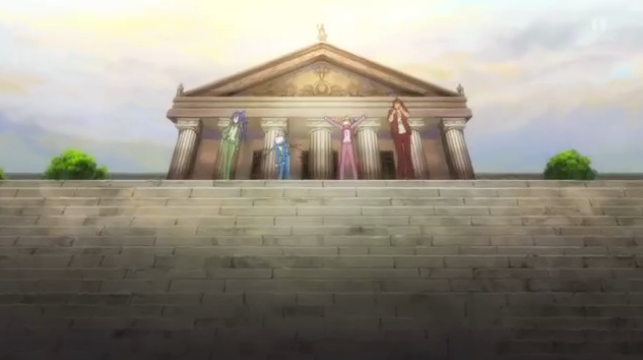 That was a horrible reference to Rocky.

Time for the bad. Do you ever think to yourself that a series would be much better if it would just take itself seriously? I felt that way about Kakumeiki Valvrave until they fixed all of that after episode five. They have yet to fix that in this series and we are two seasons in. I know that things can’t be heavy all the time, but they gave us a Rocky reference that had no place in the series.

That is what started it all. They didn’t need to train and Hibiki’s body has yet to properly adjust to the growing relic fragments. Oh well, let’s punch some meat and climb a lot of stairs. I don’t understand that at all. The commander started singing and everything. What did I learn from this? Symphogear will never live up to my expectations. I honestly enjoy this season more than the first, but that isn’t really saying a lot.

I do love the Mega Death.