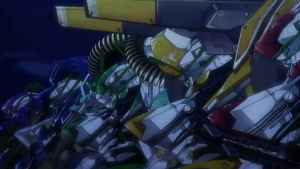 I am in the middle of a ten day stretch without a day off at work. I needed to watch something that would relax me and not completely destroy me mentally. Unfortunately, Kakumeiki Valvrave comes out on Thursday. I love this series, but my mind is barely surviving as it is. Not only did we get the normal JIOR drama, but they threw in some personal stuff for L-elf. I teared up during the first thirty seconds of the damn episode. I am a bitch. 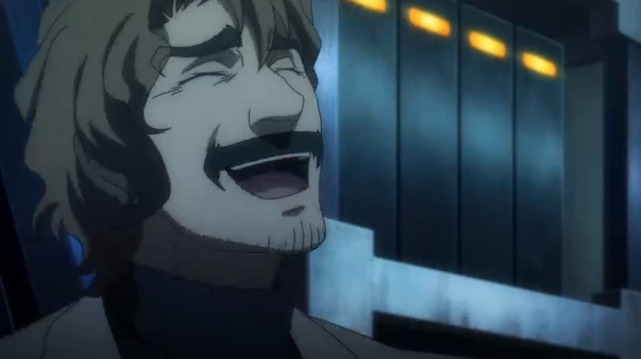 The episode starts off with a flashback of L-elf’s. He tried to run away with Lieselotte three years ago, but it failed. The two would have had nowhere to run away to and Lieselotte decided to stay behind and be tortured for betraying the Magius. Back to the kids, they just received the supplies from the Royalist party. The supplies included some intel and a few new missions were added to the list of immediate attention things. Dorssia is planning to attack Module 77 on the mon. No one seems to care about neutral territories anymore. There is a big problem with the rate of change in this war. The kids have to find a way to get back to the moon, but there are two things that they still need to do on Earth. They have yet to accomplish anything regarding their force reconnaissance and Saki is still missing. L-elf plans to use an old school rocket to take everyone back to the moon while freeing some JIOR hostages from a prison in the same city. Things would be going as planned if it wasn’t for the fact that the Royalist backer is Lieselotte. L-elf ran after her while Haruto and the others proceeded according to plan. They found some scientists that included Haruto’s dad. These scientists were actually responsible for the genetic modification of the Module 77 students. Everyone showed remorse aside from Haruto’s dad. He thinks of himself as a God and Haruto was having none of that. He made his declaration to destroy the Valvraves and things ended there for now. L-elf found his way to Lieselotte and he is not going to leave her behind this time. He has a country that will protect her and the love story continues. Too bad Cain, or whoever he is now, is hot on their trail. Oh yeah, ad Saki is at the abandoned transport with A-drei. So close, yet so far away. 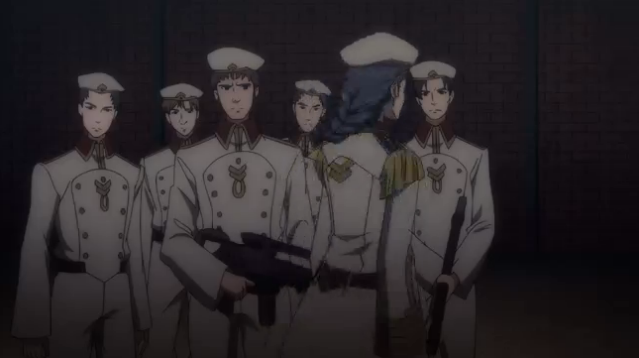 I wanted to see her reaction to H-nuen’s death.

I can’t handle how much I love this series. Let’s just talk about New JIOR for a moment. Haruto and company are a bunch of kids that have been thrown into a ridiculous situation that only works because this is an anime. They have to bear the burden of a war between several nations and a higher power made up of almost immortal beings. They don’t make it look easy though. Winning the arms race is what gives them a competitive balance and L-elf helps utilize what little they have. Did you notice the jump in the level of difficulty after Dorssia got those new mechs? Haruto has to deal with the fact that he has to feed on humans in order to fight as he slowly allows himself to become a husk of his former self. This is all happening while he has yet to come to grips with his evolutionary state and it is destroying his ability to properly love anyone. I would like to see a greater focus on some of the other pilots, but I will say that you can feel their struggle. The tension in this series is a real thing and it is destroying my brain. This is definitely my favorite series from this season. 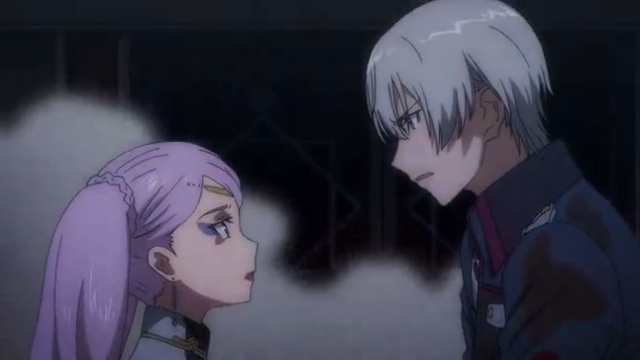 That is a new look for L-elf.

It is time to talk about the romance that had me tearing up in the first thirty seconds of the episode. I am glad that they are finally starting to show us more of the relationship between L-elf and Lieselotte. We know that she saved his life when they were children and we now know that they were close enough for L-elf to run away with her regardless of the fact that they had nowhere to go. The extremely rational L-elf was doing something for the sake of passion. Lieselotte was the only person that knew L-elf’s real name and he abandoned a mission in order to take her with him regardless of the costs. This is a beautiful romance if you ask me. It is too bad that I envision this going south. Not only is it obvious that her connection to the Magius will complicate things and it is probably the reason behind the shifting of regimes in Dorssia, but that child in the last flash forward is almost 100% the product of L-elf and Shouko. I don’t know if I can handle watching things not work out for these two. There are other things going on right now. You should definitely watch the preview for next week because something very important happens. Saki gets her body back and A-drei is having none of that. It looks like the second season promotional video’s hostage situation is about to go down and that frightens me. Oh yeah, and the moon is in danger of an attack. The only ones that can stop it are too busy beating up their fathers or trying to save women. Things may already be crazy, but the series is clearly getting more intense and I don’t know if my body is ready for that to happen. Also, it looks like X-eins may be looking into the death of H-nuen. This series is way too good. 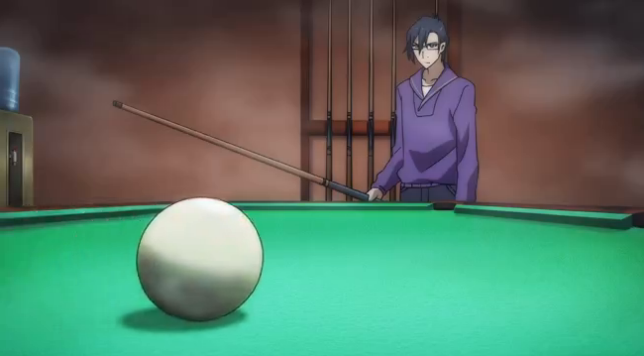