It’s probably illegal to have something that powerful in your storage shed. While it was Tsukishi’s wish that destroyed the shed, it was actually Tsukiko who wished for the typhoon to trap them in the house together. I guess it shows how much she wanted to spend time with her friends, even if it was kind of against their will. Now that I think of it, what she did was a little creepy especially since she’s always emotionless. I suppose she had good enough intentions, though, considering she’s had a broken family for most of her life. 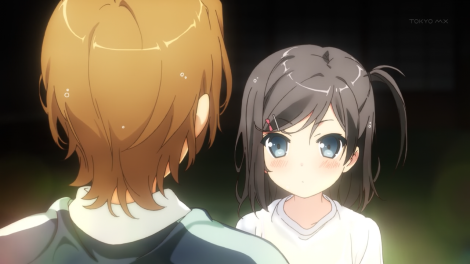 It also seems that Youto has officially completed his harem, even though for whatever reason Tsukishi likes the fake younger brother of Youto. The series is also making hard for who I want to end up with Youto. I mean, it’s gotta be between Tsukiko and Azusa, and I really think Tsukiko and Youto make a good pairing. However, the series keeps pushing Azusa, even more so than Tsukiko at times. This will probably become much more apparent next week, after Azusa makes another wish to the cat.

I kind of want Tsukiko to wish for her emotions back. She can easily do it, but she doesn’t want to because she thinks Youto will leave her after that happens. I personally think that she’d have a better chance with him with her emotions intact. But I don’t blame her for thinking this way. After all, he didn’t even remember who she was before the incident on the hill with the cat statue. I don’t know, it’s probably just my bias for an energetic Tsukiko talking.

We can only imagine what repercussions Azusa’s wish will have next week, especially considering her feelings for Youto may very well be the strongest of the three. Despite this, it seems like she always gets the short end of the stick, and I feel bad for her because of this. From the episode preview, it looks like the wish endows her with pink hair and most probably a bigger chest to compete with Tsukishi’s.